Things are going to get awfully busy for Elon Musk in 2023. That’s the year that Japanese entrepreneur and paying passenger Yusaku Maezawa will set off on his just-announced one-week mission around the moon aboard Musk’s waggishly named BFR—which nominally stands for “Big Falcon Rocket” but, this being Musk, stands for something else, too. Maezawa has booked all seven seats aboard the spacecraft and intends to fill them with artists, hoping to capture the wonder of the lunar experience and, in the process, spur the creation of great art.

Musk may be one of the only people on the planet who doesn’t get to relax and watch the mission unfold that year, because he’ll surely be preoccupied preparing for the launch of his first crew of colonists to Mars, which he announced would happen in 2024. Then too, there will be the 17-mile tunnel from downtown Chicago to O’Hare Airport that his equally waggishly named Boring Company will have dug and that will just have gone into operation, with 16-passenger cars moving along on what he describes as electric skate technology. And there will be plenty to do over at Musk’s other celebrated shop, Tesla, where production lines will have long since put their millionth vehicle on the road, and the factory will be churning to build on that impressive number.

If there is any consolation for Musk, who may be wondering how he can make good on all those exciting promises, it’s this: He can’t. He won’t. None of this is likely to happen — not on the schedule he has announced, at least. And Musk himself has to know it.

By now, it is settled fact that Elon Musk is an entrepreneurial phenomenon. But he also has a problem — and that problem is Musk himself. His recent erratic behavior has caused no shortage of hand-wringing among his stockholders, employees and customers: smoking pot on a live-streamed podcast; calling a heroic first responder who worked in the Thailand cave rescue a pedophile; tweeting out the head-snapping news that he was going to take Tesla private, only to have to walk that back when the markets went wild. (Tesla is now reportedly under investigation regarding the matter.)

But there were signs of Musk’s impulsiveness long before his recent misbehavior — in the form of all of those heady, happy promises. His plan to have people on Mars in 2024 came in 2017 and, near as anybody could tell, was made mostly in response to NASA’s announcement that it was hoping for its own manned Mars mission in 2034. So 2034 minus ten equals 2024, and you beat the storied space agency by a decade. That was a great way to get the sugar rush of immediate headlines — and Musk got them — but there was little follow-up, and Musk has gone largely quiet on the plan since.

The Chicago tunnel is, in principle, a nifty idea. But Musk has not come close to showing that he can drill remotely as fast as he claims. New York City’s Second Avenue subway project, by comparison, needed six years of active work to creep just three miles. Even if Musk does complete his tunnel, he still must invent his promised electric-skate cars. And building those million Teslas would require the production line to churn out 5,000 cars a week for 200 straight weeks — a target the company did not hit for the first time until July, and that industry skeptics doubt it can maintain.

It’s the rocket promises, however, that are Musk’s giddiest — and his silliest. SpaceX is at least three years behind schedule in developing a crewed version of its Dragon spacecraft to take astronauts to and from the International Space Station. That’s not entirely Musk’s fault. Space is hard, and no less a legacy company than Boeing is also under contract to build and fly a crew vehicle to the station and is just as far behind schedule. But Boeing isn’t bragging that it can send people a quarter of a million miles away on a circumlunar journey, at the same time that it can’t even send them 250 miles above ground.

This isn’t the first time Musk has literally promised the moon. Last year, he announced that by the end of 2018, he would send two paying passengers on the essentially same journey Maezawa is intended to make, using his Dragon spacecraft atop the in-development Falcon Heavy booster. Once again, that was followed by nothing.

The Maezawa mission, though planned for significantly later, is significantly more ambitious. In February, the Falcon Heavy had its first sensational flight, carrying a cherry-red Tesla with an astronaut mannequin at the wheel as its test payload. It was an exercise in brilliant engineering and delightful PR, but for reasons known mostly to Musk, even before the rocket flew, SpaceX announced it would not be using it to carry future astronauts. Instead it would rely on the BFR—a 38-engine behemoth that is sort of a cross between a space shuttle and a conventional booster and looks awfully snazzy on paper. But at the moment it’s only vaporware, while the Falcon Heavy is actually in the garage.

Even if Musk can get the BFR built and working, he has a lot of work to do mastering the business of long-distance space flight. The moon is a moving target that requires exceedingly complicated navigation to reach. And even if you do successfully get there and swing around its far side, the homeward trip is harrowing — especially at the end, when the spacecraft slams into the atmosphere at 25,000 miles per hour while aiming for a narrow reentry corridor just three degrees wide. Miss it and you either burn up in the thickening air or bounce off into space. No matter how good your PR, you can’t promise your way around a maneuver like that.

There is no question that Elon Musk has the rare ability to envision remarkable things and then will them into being. But he is showing an increasing weakness for the envisioning and then letting things slide when it comes to the willing. The life of the genius entrepreneur has always been lived at the knife edge—between inspiration and madness, ambition and impulsiveness, between the ability to pull off the airborne triple-twist and the discipline it takes to stick the landing. Musk has struck that balance before; he needs to start doing it again. 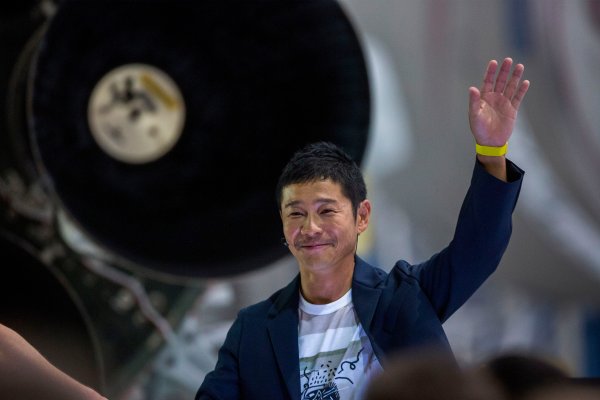 Meet the Japanese Billionaire Who's Paying Elon Musk for a Trip Around the Moon
Next Up: Editor's Pick