Pet Store Puppies Are Linked to Drug-Resistant Infections In People

Puppies are cute. But in rare cases, contact with them is putting people at risk of a multidrug-resistant bacterial infection, the Centers for Disease Control and Prevention (CDC) warns in a new report.

Between January 2016 and February 2018, the CDC identified 118 people, including 29 pet store employees, from 18 states who developed infections from Campylobacter jejuni bacteria apparently related to puppies, the report says. While the outbreak investigation is over, “the risk for multidrug-resistant Campylobacter transmission to employees and consumers continues,” the CDC says.

Bacteria from the Campylobacter family is a common cause of diarrhea, and affects more than a million Americans annually, according to the CDC. The bacteria is typically spread by eating or drinking contaminated food or water, but it can also be present in dog or cat feces.

Exposure to commercially sold puppies may be a risk factor for disease, the report says. At least 105 of the affected individuals had been exposed to dogs before getting sick, and 101 reported contact with a pet shop puppy.

No single breeder, distributor or transporter was identified as the source of the outbreak, the CDC says. But when the agency investigated six pet shop companies implicated in the outbreak, they found that many of their puppies had been treated with antibiotics before arriving at retail locations. Some of the antibiotics were the same ones that people became resistant to during the outbreak of illness, suggesting that over-reliance on antibiotics for the pets may be driving the drug-resistant infections.

The vast majority of people who interact with dogs will not contract an illness. But the report reminds consumers, retailers and clinicians that pet store puppies can be a source of campylobacteriosis. Individuals can reduce their risk of illness by washing their hands frequently, not eating near animal areas and wearing protective equipment while cleaning pets’ cages or toys, according to the CDC. Animal caretakers and suppliers, meanwhile, should follow proper antibiotic use practices, to avoid contributing to drug-resistance. 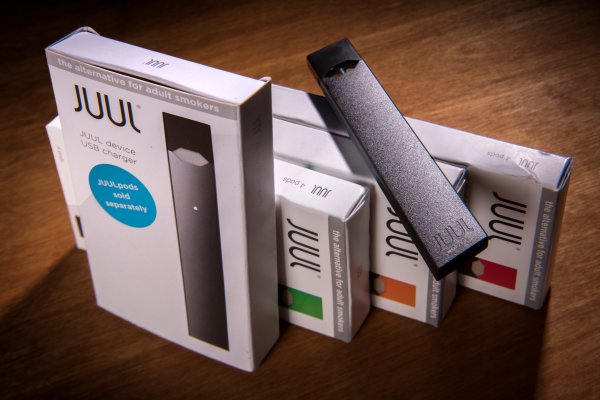 The FDA Is Considering Pulling Some Flavored E-Cigarettes From the Market to Fight 'Epidemic' of Youth Vaping
Next Up: Editor's Pick