Bleeding from the ears, pounding headaches and nosebleeds: those were some of the symptoms suffered by more than 30 passengers on an Indian airplane after pilots “forgot” to flick a switch regulating cabin pressure on Thursday morning, officials said.

The Jet Airways Flight 9W 697 from Mumbai to Jaipur turned back shortly after takeoff. The members of the cockpit crew were suspended pending an investigation, and all passengers were safe with only minor injuries suffered, according to the airline.

A hospital chief told the Indian Express that at least five patients had been taken to the hospital. “The patients are being evaluated by our ear, nose and throat consultant,” Rajendra Patankar, the chief operating officer at Dr Balabhai Nanavati Hospital, told the Express. “They have suffered barotrauma [decompression sickness] of ears due to change in air pressure.”

The 166 passengers were left in the unpressurized cabin of the Boeing 737 for 45 minutes, according to the Guardian. Videos from inside the aircraft show passengers wearing oxygen masks.

“First aid was administered to few guests who complained of ear pain, bleeding nose etc,” Jet Airways said in a statement. “The flight’s cockpit crew has been taken off scheduled duties pending investigation.”

Passengers on the plane took to social media to complain about the situation. One, Satish Nair, said on Twitter that the plane “lost pressure immediately after taking off,” and that no staff were available to help passengers and there was no announcement to wear oxygen masks. 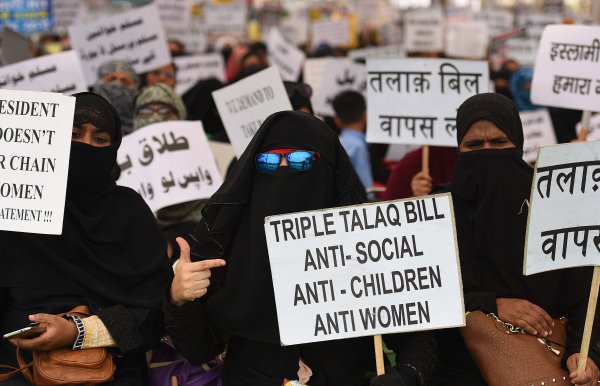 India Has Outlawed the Islamic Practice of 'Instant Divorce'
Next Up: Editor's Pick