Kate Atkinson returns with one of fall’s most anticipated novels, Transcription.
Helen Clyne
By Bethanne Patrick

Kate Atkinson pays close attention to history–and how it repeats itself. In the best-selling writer’s 10th novel, Transcription, an unlikely spy, Juliet Armstrong, receives an assignment that will alter her life forever. With a complicated structure–something of a signature for Atkinson–the book highlights the cost of living in a time when no one can be sure of alliances and loyalties, and where rising nationalism threatens the world order. Her characters, maneuvering in the 1940s and 1950s, speak directly to our time.

Transcription is one of the fall’s most anticipated books, with glowing advance reviews. Since the publication of her first novel, Behind the Scenes at the Museum, which won the prestigious U.K. Whitbread (now Costa) Book of the Year Prize in 1995, Atkinson has solidified her position as a writer of must-read historical fiction. Her two most recent novels, A God in Ruins (2015) and Life After Life (2013), were critical and popular successes. She also wrote a beloved detective series featuring Cambridge-based private investigator Jackson Brodie, which the BBC adapted to TV.

It was Life after Life that demonstrated Atkinson’s singular talent for pulling off unexpected story structures. That novel, a hit on both sides of the Atlantic, follows a young woman who must relive her existence until she succeeds in a great historical task–an ambitious setup with layers of repetition that manage to keep the reader gripped. Transcription, like Atkinson’s two preceding books, plays with time, beginning in 1981 near the end of Juliet’s life, swerving back to 1950 when she produces educational radio programs after the war, then jumping further back to 1940, when she’s in the thick of her espionage career. Juliet is carefully drawn and serves to keep the story grounded as the timeline shifts.

Atkinson, speaking over the phone from her home in Edinburgh, says she does “acres” of research for each of her books but translates only select details to the page. “I’ve learned to just make the most fleeting reference,” the author says. “That’s all that’s required of you as a novelist, to convey the ambience of a particular time.”

In Transcription, the urgent tapping of typewriter keys relays the tension of the time, when Juliet is recruited to transcribe conversations between British citizens who secretly support the Third Reich and an MI5 agent posing as a Gestapo officer.

“There was something very British about it. A sort of ordinariness, if you will,” Atkinson says, speaking of the real entrapment schemes on which she based her story. Citizens suspected of harboring pro-German leanings were invited to chat groups where they could share information–with government spies as their hosts. “A flat, people drinking tea and eating biscuits, chatting in front of a portrait of the King,” Atkinson says, describing the ordinariness and adding that many of the so-called informants were lower-middle-class women seeking some sort of validation.

Transcription manages to find a fresh angle on a war we’ve already seen depicted in literature in every possible way. At the start of World War II, Atkinson says, people were so busy worrying about what might happen that they forgot to worry about what was already happening. “I wanted to re-create the feeling of that time when nobody knew how long the war would go on,” Atkinson says. “That sense of not knowing–not knowing that the war would last six years, destroy Europe, change the entire map–is very unsettling.” There’s a pause on the phone line, then Atkinson adds, “I think we’re in that position now. We’ve had a steady history since 1945, and we have come to expect that steadiness. We have no idea what Brexit will bring.”

Global and National tensions aside, Atkinson remains comfortably settled in her Edinburgh neighborhood somewhere near (how near she will not specify) the street shared by fellow best sellers Ian Rankin, J.K. Rowling and Alexander McCall Smith. “I consider my suburb to be better than theirs,” she says, laughing. “Mine is very quiet, and I shall not name it to you.”

Atkinson’s secrecy has less to do with security and more to do with her artistic process. “I spend a lot of time being quite blank,” she says. “I would never go out if I had a choice.” That doesn’t mean she’s content with complete solitude. She’s a mother of two, and she’d like to add another member to the family, soon: a key supporting character in Transcription is a miniature schnauzer named Lily, whose mention prompts Atkinson to confess she’s ready to get a pet. “A border collie,” she says. “I want a dog who’s smarter than I am.”

The self-proclaimed homebody is about to set out on a multicity tour across the U.S. The trick, she says, is to separate her roles as writer and author. “I was brought up Katherine, and that’s the person I keep to myself,” she says. Kate Atkinson is a persona she inhabits in certain situations, not unlike the characters Juliet must play in her spy work. “Some people are very good at being genuine and not having that false self, but to me that’s very dangerous territory,” Atkinson says. “You have to preserve something in order to write.” 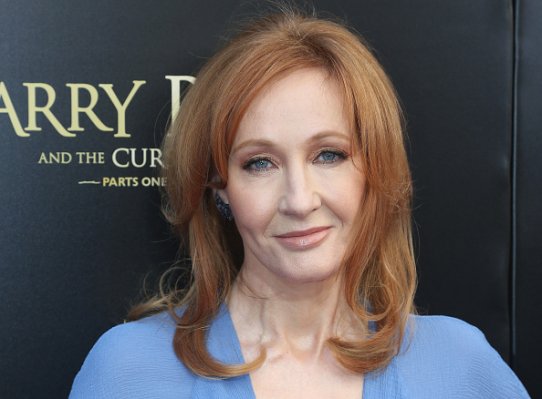 J. K. Rowling Confirms One of the Most Lighthearted Harry Potter Theories Once and for All
Next Up: Editor's Pick