Bryan Bedder—Americares/Getty Images
Ideas
By Belinda Luscombe
Luscombe is an editor-at-large at TIME and the author of Marriageology: The Art and Science of Staying Together.

The original edition of Know Your Value quoted Donald Trump before he was President. Is that why you decided to rerelease it, to expunge his presence?

Not necessarily exactly because he was in the book. You could argue that it’s important to look at how people think, even sexists and misogynists. It had more to do with just how much more we could really talk about these issues now in the age of Trump.

You write of a lunch with the President where you and Ivanka raised the issue of women’s advancement. Have you spoken to her since?

We are not getting along. I was extremely outspoken about her during the still ongoing and internationally humiliating child-separation policy issue. She wanted to talk. And I was just like, “I’m sorry. There is nothing to talk about until you step up for these children.”

Can you tell us of a time when you felt you advocated for yourself poorly?

Oh, up until the age of 41, I advocated poorly every step of the way, and it wasn’t even what came out of my mouth. It was what I thought of myself, what I considered to be my value. Knowing your value means talking about your accomplishments as if you’re talking about anything else. Women don’t do it well. I didn’t do it well.

Studies suggest people don’t like assertive women. How can women get past that?

Well, I think that question is problematic. Does it matter that you’re liked? We need to worry about being effective, being someone who gets the job done. If you are respected, then of course you’re liked.

You write that divorce can be part of knowing your value. What should a woman expect in a husband?

I don’t think I’m the greatest deliverer of marital advice. Marriage comes with a great deal of failure, and I own mine, completely.

Has the #MeToo movement made it harder for men to hire women, because they’re afraid work interactions might be misinterpreted?

Yes. I think they will be afraid. I think this is definitely one potential outcome temporarily. But there are going to be a lot of other things happening. A lot of companies are looking at their culture. A lot of men are saying, Whoa, I need to press reset. This movement is going to be tough and ugly and uncomfortable. But it needs to happen.

Do you think the #MeToo movement has taken down people who didn’t deserve it?

You’ve been supportive of Al Franken.

I’ll take a risk and say that one doesn’t feel right to me. I know Al Franken, but looking at the public record, that one does not feel fair.

Your book says people should not be tried by the media. But only one day after the Harvey Weinstein news broke, you said you would not go ahead with your book deal unless he resigned from his imprint. Is that different?

I had a set of books for women. I had my own knowledge of how Harvey operates. So I went with my gut when I made that decision. I think part of knowing your value is being more than fricking ready to put your money where your mouth is and make gut decisions.

Do you regret any of your pre-election coverage?

Um, sure! But I take issue with the way people have seen it. I think that we gave consistent viewers a window into how Trump thinks: his relationship with Putin, his moral compass. I wish more Republicans had come on our show. The only other Republican was Lindsey Graham. We did everything we could to put Hillary Clinton on our show. We sucked up to her campaign in ways that embarrass me.

Do you admire any quality in the President?

Know Your Value is available on Amazon. 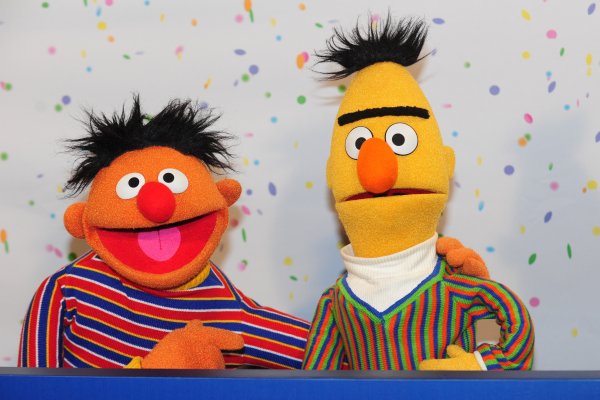 Sesame Street Responds to Claims That Bert and Ernie Are Gay
Next Up: Editor's Pick