'I Was Expecting a Private Proposal.' The Woman Who Got Engaged During the Emmys Was Just As Surprised as You

When Academy Awards director Glenn Weiss popped the question to Jan Svendsen during his acceptance speech for Outstanding Directing for a Variety Special at the 70th Primetime Emmys on Monday, the couple gave everyone watching the most exciting moment of the night.

And on Wednesday morning, the couple shared the story behind their Emmys 2018 onstage engagement — a first for the awards ceremony— in an appearance on the Today show.

“I was expecting a private proposal if there ever was to be one,” Svendsen a producer who was also the Chief Marketing Officer for the Tony Awards said. “Wait, that wasn’t private?” Weiss cracked.

But the proposal had a bittersweet touch. As Weiss explained in his Emmys speech, the ring belonged to his late mother, who passed away two weeks before the awards show.

Cutaways from the audience showed Leslie Jones appearing shaken and Claire Foy crying. And for viewers at home, the proposal was Facebook’s most social Emmys moment, according to Deadline.

“The fact that I have been able to wear this ring and get engaged with this ring was so meaningful for both of us,” Svendsen told Today.

If he hadn’t won, Weiss said he would have likely just proposed at In-N-Out burger, “which is like our staple after award shows,” Weiss said.

Lest you think the awards show veterans choreographed the show with a show, Weiss insisted that he didn’t plan it, when InStyle caught up with the pair backstage.

“You can’t come in and plan this,” he said. “The timing just lined up very nicely, and it was a really magical moment.”

“I had no suspicions whatsoever. I had no idea,” she said. 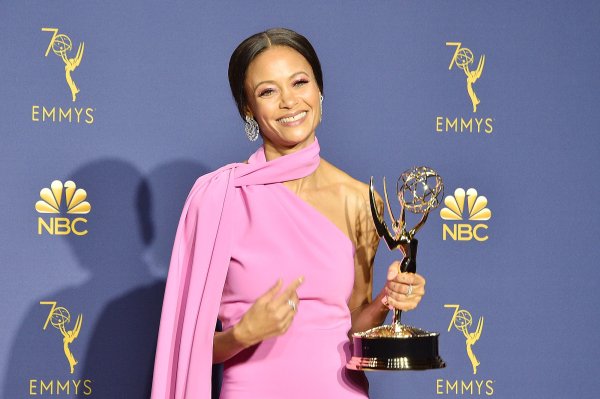 Thandie Newton Thanked God With a Clever Message at the 2018 Emmys
Next Up: Editor's Pick