These Four Republicans Voted for Clarence Thomas. Here's What They're Saying About Brett Kavanaugh

Four senators who voted to put Clarence Thomas on the Supreme Court remain in office, and one of them is now leading the committee overseeing the confirmation hearings of Brett Kavanaugh.

As Trump’s nominee faces an allegation of sexual assault as a teenager, comparisons have been made to sexual harassment allegations made by attorney Anita Hill against Thomas in 1991.

Almost every Republican Senate seat has turned over since then, except the four senators: Chuck Grassley, Orrin Hatch, Mitch McConnell and Richard Shelby. All are Republican men who voted for Thomas, though Shelby was a conservative Democrat in 1991. Democratic Sen. Patrick Leahy, who was also in the Senate in 1991, voted against Thomas.

During the Thomas hearings, Hatch and Grassley were particularly outspoken in casting doubts on Hill.

After Hill, then 35, testified in front of a famously all-male Senate Judiciary Committee including Hatch, the Utah Republican told reporters he didn’t believe her account.

“There’s no question in my mind she was coached by special interest groups,” he told the Deseret News. “Her story’s too contrived. It’s so slick it doesn’t compute.”

Hill accused Thomas of describing to her “acts that he had seen in pornographic films involving such matters as women having sex with animals and films showing group sex or rape scenes,” asking her out on repeated occasions and discussing the size of his penis with her, among other things.

But Hatch argued that she may have gotten the description of an incident in which Thomas allegedly said that someone had put a pubic hair on his Coke can from a scene in the book “The Exorcist.”

In a 2010 interview, Hatch said that he still believed Hill’s testimony was untrue, arguing that she had attributed things someone else did to Thomas.

“I can tell you Clarence Thomas was telling the truth,” he said. “I believe that Anita Hill was an excellent witness. I think she actually believed and talked herself into believing what she said. There was a sexual harasser at that time, according to the sources I had, and he was her supervisor, he just wasn’t Clarence Thomas.”

In recent days, Hatch has also cast doubts on psychology professor Christine Blasey Ford’s allegation that a teenaged Kavanaugh held her down, put his hand over her mouth and attempted to remove her clothing at a house party in Maryland in the 1980s.

He also added that even if the assault allegations were correct, senators would be obliged to consider Kavanaugh’s entire record.

“If that was true,” he said, “I think it would be hard for senators to not consider who the judge is today. That’s the issue. Is this judge a really good man? And he is. And by any measure he is.”

Grassley, who also served on the Judiciary Committee in 1991, described the witnesses who testified about Thomas as an “effort to assassinate the character and integrity” of the nominee.

As the chairman of the committee today, the Iowa Republican has given Ford a deadline of Friday to agree to a hearing next week in which she and Kavanaugh would testify, much fewer than the witnesses who testified in Thomas’ case.

Asked about the difference, Grassley told a reporter, “You’re talking about history. We’re not looking back. We’re looking forward.”

After Thomas was confirmed to the Supreme Court by a vote of 52-48, McConnell, now the Senate majority leader, called Thomas a “winner” for emerging from Hill’s “unproven allegations.”

Today, the Kentucky Republican has focused his ire on the process surrounding Ford’s allegation.

“Now, at the eleventh hour with committee votes on schedule after Democrats have spent weeks and weeks searching for any possible reason that this nomination should be delayed, now, now they choose to introduce this allegation,” McConnell said, before convening a lengthy meeting with GOP Senate Judiciary Committee members. There, McConnell indicated he was “100 percent behind Kavanaugh,” according to Politico.

Shelby also voted yes on the confirmation of Thomas in 1991, but has taken a more neutral stance on Kavanaugh since Ford’s claims.

“Senator Shelby believes that these are serious accusations,” his communications director said. “Chairman Grassley and the Judiciary Committee are working to hear her out.”

Experts argue that Republicans risk another parallel to the Thomas hearings: The backlash among women voters that followed in the next congressional elections, which led to 1992 being dubbed the “Year of the Woman.” Since then, the number of women in the Senate and the House has more than doubled.

Debbie Walsh, the director of the Center for American Women and Politics at Rutgers University, said that Republicans may be emboldening the Me Too movement against sexual harassment and assault regardless of how they vote.

“I think that no matter the outcome, if he is not confirmed and it’s because of this, or if he is confirmed in spite of this, it will energize this movement that’s out there even more,” she said. 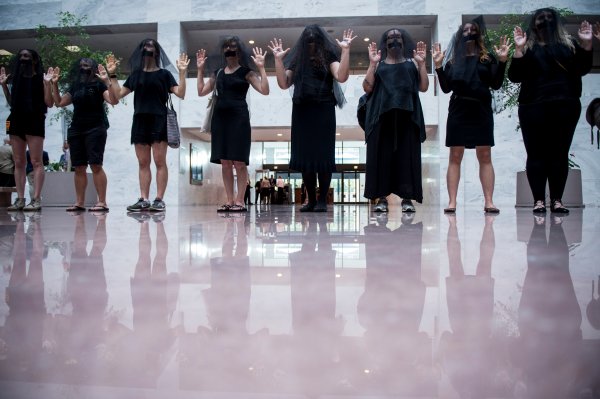