Apple's Big iOS 12 Update Is Now Available. Here's How to Upgrade and What You'll Get

Apple last week unveiled the latest additions to its iPhone lineup: The iPhone XS, iPhone XS Max, and iPhone XR. While they boast improvements like an upgraded processor and better battery life, they certainly aren’t cheap — the iPhone XR starts at $749, while the high-end iPhone XS Max goes all the way up to $1,449.

If you’re finding those prices tough to swallow, there’s another potential solution. Apple on Monday released iOS 12, the newest version of the mobile operating system that powers iPhones and iPads. The free upgrade is reportedly giving older iPhones a performance boost. That means it could help you get more mileage out of your existing device before you upgrade. And Apple tested iOS 12 in a public beta period that (hopefully) helped it iron out any bugs before this week’s formal release.

Here’s how you can upgrade your iPhone or iPad to iOS 12, and what you’ll get out of it.

Before You Update to iOS 12

Before you embark on this upgrade journey, you’ll need to do a few things to ensure everything goes smoothly. For one, you’ll need your iPhone or iPad to be charged to over 50%, though leaving it plugged in while it updates is also an option. You should also have your Apple ID username and password on hand just in case you have to verify your identity before you upgrade.

Backing up your device is also important, just in case something goes wrong during the iOS 12 upgrade process. It will also make it easier for you to switch to a newer device should you decide to get a new iPhone. By setting up a new device from a recent backup, you’ll be able to transfer everything from your apps and notifications settings to your preferences and other changes from your old iOS device to your new one.

You can download the iOS 12 update on your iPhone or iPad over Wi-Fi if it’s plugged into a charger.

In the Settings app, select General, then Software Update. If you’re lacking any extra storage needed to download the update to your device, you can temporarily delete (and automatically reinstall) apps to make room until the installation is complete. You can always schedule the install to occur when you’re not using your phone — perhaps overnight so it’s ready to go when you’re up in the morning.

Downloading iOS 12 will bring several new features to your iPhone or iPad, including…

Screen Time might be one of the most interesting additions in iOS 12. You probably spend a bit longer than you should staring at your phone, receiving messages and replying in kind with humorous quips and GIFs. Screen Time aims to eliminate those distractions by limiting your time spent in certain apps, and making your phone less attractive to use when it’s time for bed. You’ll see a chart displaying how you spent your time on your iPhone, and which apps are taking up your time. You can also set a restriction passcode to prevent you from bypassing the self-imposed limit.

Unfortunately, Screen Time only works if you allow it to. Since you’re the one with the power to enable (or disable) the feature, making sure it does its job depends more on your willpower than on the feature itself.

Apps taking advantage of the iPhone’s augmented reality feature will let you perform tasks like preview furniture in your home (by pointing your camera at its prospective location) or play tabletop games with no actual game board. But Apple’s own augmented reality app is probably the most useful. iOS 12 includes a Measure app, available on the iPhone 6s and newer devices, which lets you measure real-world objects like boxes, walls, and even the cat if it sits still long enough.

Apple’s Animoji use the iPhone’s front-facing Face ID system (available on the iPhone X, XS, XS Max, and XR) to animate characters like robots, aliens, and cats using your own face. Memoji in iOS 12 allow you to make characters that look just like you, as long as you think you resemble a Pixar-esque floating head. You can use those Memoji faces in different apps like Messages and FaceTime, where you can use your Memoji in real-time while you deal with a bad hair day.

Using SMS to enable two-factor authentication on your apps and services? Now you’ll be able to autofill those verification codes so you won’t have to switch between apps every time. Safari can now create and store randomly generated passwords, reducing the risk of your account getting hacked by someone guessing “password123.” Password manager users can rest easy, too. You’ll be able to use apps like 1Password, Dashlane, and other password managers to automatically fill out login prompts, meaning the days of copy and pasting secure passwords is nearly over.

Bonus: Even Old iPhones Can Get iOS 12

If you’ve still got an old iPhone kept alive through screen replacements, battery changes, and a paranoia that requires it stay in a protective case for eternity, you’re in luck. Apple’s iOS 12 brings a bunch of new features to your device, but it’s also designed to support older devices without bringing them to a slow crawl. Apps launch faster, typing is more responsive, and animations won’t be as choppy even though you’re using an older device. The performance improvements make sense, considering Apple’s work to reduce electronics waste. 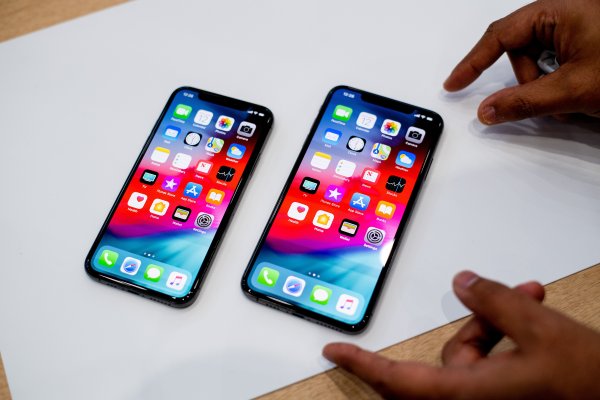 iPhone Xs vs. iPhone Xs Max vs. iPhone Xr: Which New Apple Smartphone Is Right for You?
Next Up: Editor's Pick