U.N. investigators renewed their call on Tuesday for the investigation and prosecution of Myanmar’s top military officials for genocide and war crimes, publishing an exhaustive account of atrocities allegedly committed against the country’s Rohingya Muslims and other minorities.

More than 700,000 Rohingya, a persecuted and mostly stateless minority, have fled across the border into Bangladesh since August last year when the Myanmar military launched a brutal crackdown in response to an attack by Rohingya insurgents. Refugees say they fled a campaign of arson, rape and murder that saw entire villages burned to the ground.

In the wake of a similar campaign of violence that began in October 2016, the U.N. Human Rights Council established an international fact-finding mission to investigate allegations of abuses in Rakhine state, where the Rohingya are from, as well as the war-ravaged states of Shan and Kachin. Though they were repeatedly denied visas to Myanmar, investigators drew on documentary evidence, satellite imagery and 875 interviews over the course of 15 months.

Myanmar authorities deny the allegations, while the U.N., journalists and aid workers are largely barred from affected areas. Earlier this month, a Myanmar court sentenced two Reuters reporters to seven years in prison for investigating the military’s role in a massacre of 10 Rohingya men and boys.

The mission presented its full findings to the Human Rights Council in a 440-page report. It found that the Myanmar military, known locally as the Tatmadaw, “systematically” targeted civilians with acts of sexual violence, torture, and forced labor. In Rakhine, the report said, the Military’s conduct resembled a “veritable check-list” of crimes “calculated to bring about the physical destruction of the Rohingya group, as an underlying genocidal act.”

The thee-member mission called on the U.N. Security Council to refer Myanmar to the International Criminal Court or establish an alternative tribunal.

“The top generals should be investigated and prosecuted for genocide in Rakhine State. I have never been confronted by crimes as horrendous and on such a scale as these,” said committee chair Marzuki Darusman, according to a news release.

Myanmar’s delegate to the Human Rights Commission rejected the committee’s findings again on Tuesday, calling the report “one-sided.” But earlier this month, the ICC ruled that has legal jurisdiction to rule on Myanmar’s deportation of the Rohingya, opening the door for initial prosecutorial investigations.

On Tuesday, the commission also called for targeted sanctions against top military officials and an international arms embargo. It also recommended the military, which is not subject to civilian oversight under Myanmar’s 2008 Constitution, undergo a wholesale reorganization to reform a “toxic command climate” that supported impunity for rights abuses.

“Ignorance on the part of the Myanmar civilian authorities was effectively impossible,” the report said. 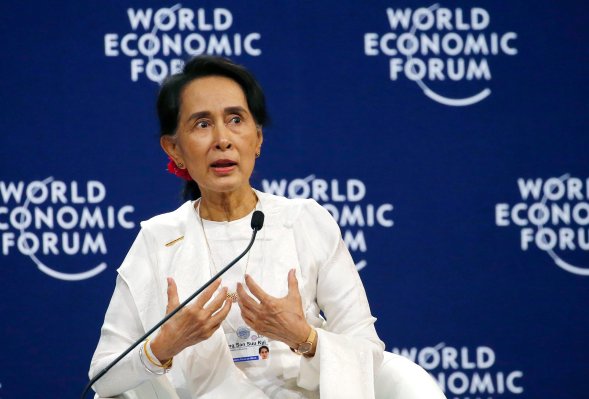 Suu Kyi: Rohingya Crisis Could Have Been 'Handled Better'
Next Up: Editor's Pick