People visit an auction of government owned used cars at the premises of Prime Minister House in Islamabad, Pakistan on Sept. 17, 2018.
Faisal Mahmood—Reuters
By Eli Meixler

The sale of bulletproof luxury vehicles, helicopters and even eight buffalo drew hundreds of curious onlookers but few buyers to an “austerity-drive” auction held by the Pakistani government this week.

The auction, which was intended to earn as much as $16 million to help fill Pakistan’s coffers, netted just $600,000 on Monday, the BBC reports.

More than 100 used cars were on the auction block at the government’s heavily-publicized fire sale. But many of the vehicles were far from ritzy, and some had been purchased as far back as the 1980s.

Only 62 vehicles found buyers, the most expensive of them a bulletproof 2015 Toyota Land Cruiser that was sold for $200,000. Four bulletproof 2005 Mercedes jeeps were also purchased, but more than a dozen other Mercedes and seven BMWs remained unsold.

The auction’s top-billing items, a pair of Mercedes Maybach S-600s acquired in 2016 under former Pakistani Prime Minister Nawaz Sharif, were also snubbed. The cars, which were being sold for $1.3 million each, were greeted with laughter but no bids, the BBC reports.

The auction wasn’t Pakistan’s first, according to the BBC, but it was promoted by Prime Minister Imran Khan’s administration as an austerity measure. Khan, a former cricket star, was elected in July on a populist anti-corruption platform, but critics say his economic approach has been more about rhetoric than policy. Khan also drew criticism last month when it was revealed that he commutes by helicopter to avoid Islamabad’s notorious traffic.

But that mattered little to Afzal, a buyer from Rawalpindi who left the auction with one of the day’s biggest bargains: a 2005 Suzuki hatchback that cost just $4,000. “After all, the money will return to our national exchequer and this is what our prime minister wants,” he told BBC Urdu. 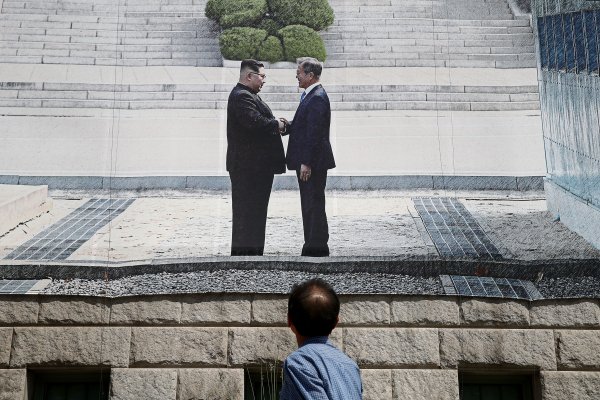 Can the Koreas Make Peace?
Next Up: Editor's Pick