The Senate Judiciary Committee said it would hold a public hearing next week with Supreme Court nominee Brett Kavanaugh and Christine Blasey Ford, the woman who claims the judge sexually assaulted her nearly four decades ago.

The decision, which will likely push back the confirmation timeline – the committee was expected to vote on Kavanaugh’s nomination this coming Thursday – came one day after Ford publicly identified herself in an interview with the Washington Post as the woman who had written a letter to Sen. Dianne Feinstein describing her alleged ordeal with Kavanaugh when they were in high school. Ford told the Post Sunday that she and Kavanaugh were at a high school house party in the 1980s when Kavanaugh, who she says had been drinking, pinned her to a bed and groped her in an effort to pull off her clothes. When she tried to scream, Ford told the Post that Kavanaugh put his hand over her mouth.

“As I said earlier, anyone who comes forward as Dr. Ford has done deserves to be heard …. to provide ample transparency, we will hold a public hearing Monday to give these recent allegations a full airing,” Senate Judiciary Chairman Chuck Grassley said in a statement Monday evening announcing the evening.

Kavanaugh, who has denied the incident ever occurred, had said in a statement released through the White House Monday that he was willing to testify as soon as possible. Ford’s attorney, Debra Katz, said Monday morning on cable television that her client was willing to do so as well. She did not immediately respond to request from comment for TIME.

Grassley’s decision capped off a hectic day in the Senate that was filled with calls from senators on both sides of the aisle who wanted to hear from both Ford and Kavanaugh about the elections. Those pushing for testimony included Sens. Susan Collins and Lisa Murkowski, two members of the Republican conference Democrats have targeted as possibilities for bucking the party line and voting against Kavanaugh.

“Allegations surrounding sexual assault must be taken seriously and the Judiciary Committee must look into this further. Despite the length of time since the alleged incident, Dr. Ford’s allegations should be heard and she must have an opportunity to present her story before the committee under oath, with Judge Kavanaugh having the opportunity to respond under oath as well,” Murkowski said in a statement Monday.

Collins said it would it be “disqualifying” if Kavanaugh had lied about the allegations, but said she did not have information to asses the veracity of Ford’s allegations.

“I believe in order for me to assess the credibility of these allegations that I want to have both individuals come before the senate judiciary committee and testify under oath,” she told reporters in the Capitol Monday.

Feinstein’s office did not immediately respond to request for comment. All of the Democrats on the judiciary committee sent a letter to Grassley earlier in the day asking to delay the hearing until the FBI conducted a thorough investigation. At the end of the day, they had also sent a letter to White House Counsel Don McGahn to ask the FBI to re-open Kavanaugh’s background check. And Democrats refused to attend the meeting where judiciary staffers questioned Kavanaugh on the allegations, claiming the efforts weren’t sufficient.

When asked earlier in the day if committee Democrats would be satisfied with a hearing instead of re-opening an FBI investigation, a spokesperson for Feinstein said the focus was on the FBI and declined to discuss any hypotheticals. 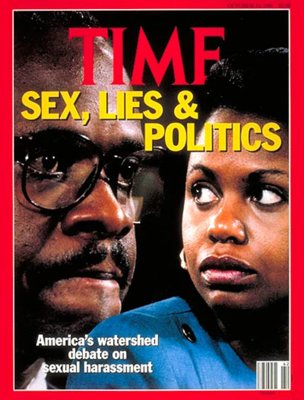 Brett Kavanaugh Isn’t the First Supreme Court Nominee Accused of Sexual Misconduct. Here’s What Happened Before
Next Up: Editor's Pick