'This Is My Home.' North Carolina Residents Struggle With Evacuation Orders

As the rain pounded Fayetteville, cars pulled in and out of the parking lot at Campbellton Landing on Person Street. One-by-one, drivers and passengers hopped out of their vehicles to face the pounding rain, all to get a look at the rising Cape Fear River, which is expected to climb high enough to cover the train tracks near Karen Malloy’s house near Deep Creek Road.

“When Matthew came, you could put your hand down between the railroad and touch the water. Another foot and it would have been on our road,” she said. “And they’re talking about it’ll be four feet over now.”

Malloy’s home is one of nearly 2,800 in the Fayetteville area affected by a mandatory evacuation order issued by the city’s mayor. Those who didn’t heed his call, he warned, should notify their next of kin. And while she planned to make her way to her sister’s house on the other side of town by that afternoon. But Malloy’s two adult sons, who just happen to live next door to her, weren’t sure if they’d join her, despite how much she wanted them to.

“When I see that river take over the train tracks, then I might get worried,” said Russell Malloy, one of her sons. He was using his fork to cut up bits of sausage in the bowl of white rice he was eating, watching ESPN on a flat screen TV in his front room.

Theirs was a dilemma many have had to face over and over again since Hurricane Florence, now a tropical depression, landed ashore. Is it worth it to leave? Will it really be that bad? Evacuations are inconvenient. But, repeatedly over the past few days, Florence’s wrath has won out. The storm’s death toll had risen to 18 by Monday morning. Chunks of Interstate 95 were rendered impassable. Wilmington, along the coast, was effectively cut off from the rest of the state by water. At least half of central North Carolina was at risk of facing flash floods on Monday morning.

Thousands of people have already evacuated. Around 15,000 are in North Carolina emergency shelters, and hundreds more in hotels, motels, and the homes of friends and family across the state. But as rivers crested, creeks rose, and roads flooded, many more were forced out out of their homes as the storm’s remnants lingered in the area.

As Cedar Creek in flooded, the roads in Dennis Virts’ neighborhood turned into rivers. On Sunday afternoon, an armoured police rescue vehicle drove through the waters to help move people away from the area. “I didn’t wait around for them,” Virts said, smoking a cigarette in an empty car wash, out of the beating rain. “I just walked out.”

In Lumberton, N.C., members of the National Guard reportedly traversed the town instructing people in areas prone to flooding to leave the area.

On Water Street in Lumberton, the Lumber River had already begun to surround Dawn Davis’ house on Sunday afternoon. A makeshift obstruction — 5,000 bags of sand crews had dumped on the banks of the river with hopes that it would keep the town from flooding — had already failed. “I guess if it gets a little bit more higher, we’ll all end up leaving,” Davis said. “I’m just trying to put it off.”

Her next door neighbor, Bennie Todd, and his family had already had water coming through the top of their house: during the hurricane, the shingles of their roof flew off and so his son, Ben, and son-in-law climbed on the roof and covered it with a bright blue tarp. But the Todd family had no plans to leave. “As long as it doesn’t come up from the bottom, we’ll be alright,” Benny said, swiping the air with an orange flyswatter as he swung from a white wooden bench on their screened-in porch.

Rochelle Chatman took photos of the Lumber River, its swift waters flowing just inches from the bottom of the bridge he stood on. He says Chatman says water has already seeped into his house — the second time in as many years — so he and his nine-year-old son have been staying with a cousin in a different part of town.

J.J. Malloy quickly took issue with his brother’s timeline. “I don’t think we should wait until that long, bruh,” he said Sunday, standing in a doorway just off the front room.

Russell backtracked: Perhaps they wouldn’t wait that long, but he sure as hell wasn’t in a rush to leave. “I’ve lived here a long time. All my life. I know this river like the back of my hand,” he said. “It could reach my backyard, but at the same time I don’t think it’s going to be inside my house.”

“If it gets as bad as Matthew was and we still have rain left. It’s not really a question anymore,” J.J. said. “But I’m really not trying to leave. This is my home.”

They soon may not have a choice. By Tuesday, the river is supposed to crest four-feet above the level it did during the 2016 storm. The North Carolina coast may have been in the eye of Hurricane Florence, now a tropical depression, but the state’s central cities have remained in its crosshairs. 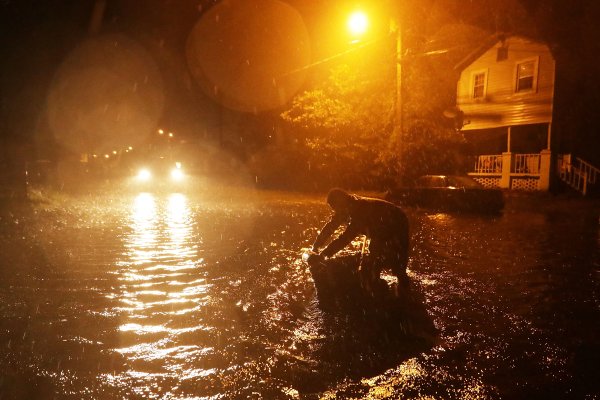 The Military Says It's Ready For Hurricane Florence. What Did It Learn From Puerto Rico?
Next Up: Editor's Pick