Brett Kavanaugh's Accuser Now Has a Name. That's Changed Everything

Political fights on Capitol Hill are often described in shorthand by their winners and losers. But in the fight that is about to unfold over Supreme Court nominee Brett Kavanaugh, there will likely be no winners.

Not Kavanaugh, who faces tough questions about his past that could haunt him even if he is confirmed, as they have for Justice Clarence Thomas. Not President Donald Trump, who will now see allegations about his own behavior toward women recirculated.

Not Republican senators, who risk further inflaming women voters just weeks before a midterm election with a gender gap that has turned into a yawning gulf. Nor Democratic senators, who risk both looking like they waited too long to act on the accusation and that they were too eager to go on a searingly personal attack.

And certainly not California professor Christine Blasey Ford, who in deciding to come forward with her allegation that a teen-aged Kavanaugh pinned her to a bed at a high school house party and attempted to remove her clothes against her will has been thrust into a burning hot national spotlight with irreversible consequences for her life.

That decision, which came through a Washington Post interview published Sunday afternoon, appears to have already changed the political calculus on Capitol Hill.

Among Senate Republicans, the interview came like a broadside. They thought they had contained the allegation to a confidential letter that most hadn’t even bothered to read. They were ready for a vote on Kavanaugh’s confirmation this week and had agreed with the White House’s decision on Friday to dismiss questions about the allegations as nonsense. At worst, senior officials were conceding that it would be “a distraction.”

Many Republicans on Capitol Hill believed the letter to be roughly equivalent to the op-ed published in the New York Times last week by an unnamed senior official in the White House which alleged that Trump’s own staff was working against him. While the president’s critics shared the op-ed widely, polls showed that a plurality of Americans disapproved, and four-in-five Republicans thought the whole matter was ridiculous.

By Sunday evening, a few hours after Ford had come forward, South Carolina Sen. Lindsey Graham, a Trump ally who sits on the Judiciary Committee, had told Senate Majority Leader Mitch McConnell that the committee should at least hear testimony from her, while Alaska Sen. Lisa Murkowski, a key target for Democrats looking to derail the nomination, had said that the committee should consider delaying its vote. “This is not something that came up during the hearings,” she said. “The hearings are now over. And if there is real substance to this it demands a response.”

In recent days, the story unfolded with the tight scripting of a police procedural.

On Thursday, Sen. Dianne Feinstein, the ranking member of the judiciary committee, disclosed that she had given federal authorities information about Brett Kavanaugh, and reports began circulating that the information involved a sexual harassment allegation. The New Yorker revealed Friday that the woman who had sent the letter to Feinstein and had asked not to be identified, alleged that during an encounter at a party Kavanaugh had held her down, putting his hand over her mouth, in an attempt to sexually assault her, while he and a classmate had turned up music to drown out her protests.

Kavanaugh released a statement through the White House, which had no other comment. “I categorically and unequivocally deny this allegation. I did not do this back in high school or at any time,” he said. Republican Sen. Chuck Grassley, the chair of the Senate Judiciary Committee, released a letter from 65 women who knew Kavanaugh in high school attesting that he “behaved honorably and treated women with respect.” Republican operatives advocating for Kavanaugh’s nomination were quick to refer reporters to women who had clerked for him attesting to his character.

The charges were explosive, but without a named accuser they seemed to hang in the air. The classmate, Mark Judge, told the magazine he had no recollection of an incident like that, then went further with the conservative Weekly Standard to say the allegation was “just absolutely nuts.”

On Sunday, Ford came forward with the Post interview, adding troubling new details. “I thought he might inadvertently kill me,” Ford said. “He was trying to attack me and remove my clothing.” She said that she had not disclosed the attack at the time, since she had been able to escape and was afraid her parents would be mad that she had been at a party with teen-aged drinking. But she had talked about it — without naming Kavanaugh — during counseling in 2012 and provided copies of her therapist’s notes to the newspaper.

Republicans have criticized Feinstein for the fact that the letter came to light so late in the process, but for those opposed to Kavanaugh’s nomination, Ford’s last-minute interview proved it was not a political stunt.

“There’s no way Republicans can say this is a Hail Mary pass or last ditch as a claim because it’s clear that they were reported to the committee months ago,” Nan Aron, the President of Alliance for Justice, a progressive judicial advocacy group that is opposed to Kavanaugh’s nomination, told TIME.

Ford’s decision to come forward gave Democrats a round of ammunition just when it appeared that Kavanaugh would inevitably be confirmed in time for the Supreme Court’s upcoming term that begins in October. Feinstein immediately called for the Senate to halt his nomination until the FBI conducts an investigation, a call echoed by several other members of the committee, including Sens. Kamala Harris and Cory Booker, both of whom are considered to be vying for their party’s nomination in 2020.

“The Senate has a constitutional responsibility to scrutinize SCOTUS nominees,” Harris said in a tweet. “A vote on Kavanaugh’s nomination must be delayed until there is a thorough investigation.”

But even if Aron is right, and this allegation intensifies public opposition to Kavanaugh, which was already relatively strong — a CNN poll released in August showed his nomination had the lowest level of support since the failed nomination of Robert Bork over three decades ago, numbers that didn’t change significantly after his hearings — it’s still highly likely his nomination reaches the Senate floor before the November elections. As of Sunday night, Kavanaugh’s nomination was on track to proceed as scheduled; the Judiciary Committee had not canceled its Sept. 20 vote to move it to the Senate floor. That means that, given Republicans’ 51-49 advantage, a vote along party lines would put him on the bench, unless two Republicans defect.

This was always the case, but this latest allegation doesn’t seem to have changed any minds among Republicans committed to Kavanaugh and those who have yet to decide. Those close to Senate Majority Leader Mitch McConnell said there were no indications he was ready to pull the nomination. He has called the allegations troubling but unsubstantiated — grist in the Washington political machine, not worth squandering a Supreme Court nomination. At the same time, he has told his colleagues that the Kavanaugh nomination is running incredibly popular among the party’s base. One poll last week had opposition at a mere 5% among Republicans. That, McConnell sees, is a clear mandate to move ahead.

Those close to Grassley decided their best play was to treat this latest development as a political smear. His advisers told Grassley to attack Feinstein and Democrats and to question the motivation for this coming out so late.

Senate Democrats, along with advocacy organizations like Planned Parenthood who have mobilized against Kavanaugh’s nomination, once again pinned their hopes on Murkowski and Maine Sen. Susan Collins, perhaps hoping to convince them to at least hear from the woman during a hearing. (Planned Parenthood is now considering expanding the list of lawmakers it will target). Although neither senator has committed to voting for Kavanaugh, Democrats didn’t think they had gotten the message through to the female Senators often seen as swing votes in the GOP conference. Neither of their offices issued an official statement Sunday, although Collins told a CNN reporter who caught her in the airport that she found the allegation “surprising” and it was something she had discussed with the judge during their prescheduled hourlong phone call this past Friday.

But Democrats did have glimmers of hope that had them quickly sharing among themselves — and reporters — news that the McConnell wall was cracking. Along with Graham, Sen. Jeff Flake of Arizona, a Trump foil who is retiring, told the Washington Post that he wouldn’t support a vote without knowing more. Sen. Bob Corker, another lawmaker who is retiring and has frequently faced off against Trump also said the committee shouldn’t vote without hearing from Ford. (Corker does not sit on the committee).

The other Republican members of the judiciary committee, however, remained silent. The split in responses between the members of the party reflects how they are finding themselves in a bind, no matter what happens. In a sense, it’s a lose-lose situation. If the conference sticks together and confirms Kavanaugh, Republicans will have achieved a master feat of confirming two conservative judges to the Supreme Court in less than two years, tilting the most powerful judicial body in the country rightward for a generation.

But if they do so in the midst of these allegations — particularly in an era that has seen powerful men like Harvey Weinstein brought down by such claims — they could be hurting their electoral chances in the upcoming midterm elections, which are already an uphill battle. CNN reported in July that the November elections are expected to have the largest gender gap on record for midterms since polling was first available in 1958, and that women heavily supported Democratic candidates.

Women already were opposed to Kavanaugh, but by a slim 8- to 10-point margin in internal polls. These allegations were expected to perhaps double that opposition among women at exactly the moment Republicans strategists are worried women could hand the House and maybe the Senate to Democrats this November. Republican leaders appeared cognizant of this dynamic. Sen. Cory Gardner, the chairman of Senate Republicans’ campaign machine, has asked Senate campaigns to hold off responding until McConnell has had a chance to weigh in publicly. (Only one Republican on the committee, Texas Sen. Ted Cruz, is actually up for reelection this year).

“I don’t think Republicans have a clue as to how disturbing the allegations are and how women and men around the country will want to put a brake on the momentum going forward,” said Aron, the head of Alliance for Justice. “I think as much as Republicans are going to want to push forward, this will be a red light. this will cause them to stop.”

-With reporting by Tessa Berenson in Washington and Philip Elliott in Tampa, Fla. 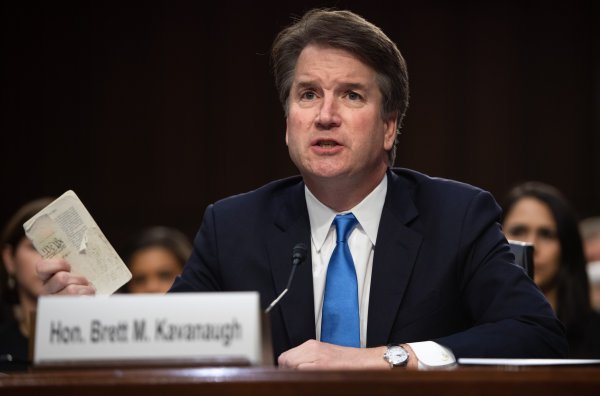 Democrats Held Kavanaugh's Feet to the Fire During Day 2 of Hearings
Next Up: Editor's Pick