Anti-Kremlin activist Pyotr Verzilov who lost his sight, hearing and ability to walk in a suspected poisoning last week arrives on a special medical transport plane at Schoenefeld airport in Berlin, Germany on Sept. 15, 2018.
Handout/Reuters
By Casey Quackenbush

A member of the Russian punk rock activist group Pussy Riot was flown to Berlin for treatment Saturday after a suspected poisoning in Moscow earlier this week, the Guardian reports.

Pyotr Verzilov has been hospitalized since Tuesday when he fell ill during a court hearing. His symptoms included loss of vision and ability to walk.

Fellow Pussy Riot member Veronika Nikulshina was quoted by local media last week saying that he was being treated in the toxicology unit of a hospital in Moscow, suggesting that he may have been poisoned, according to the Associated Press.

“We hope now that he will be helped quickly in Berlin and that we can then establish whether and how he was poisoned in Russia,” the foundation’s founder Jaka Bizilj told the German newspaper Bild, according to the Guardian.

Verzilov’s ex-wife Nadezhda Tolokonnikova, also a Pussy Riot member, told Bild that his illness was “deliberate” and intended to “intimidate or even attempt to murder” him, according to the Guardian.

A video she posted on Twitter appears to shows Verzilov through the door of an airplane.

Verzilov was among four members of the group who served 15-day prison sentences for a protest during the World Cup that involved storming the pitch dressed as police. 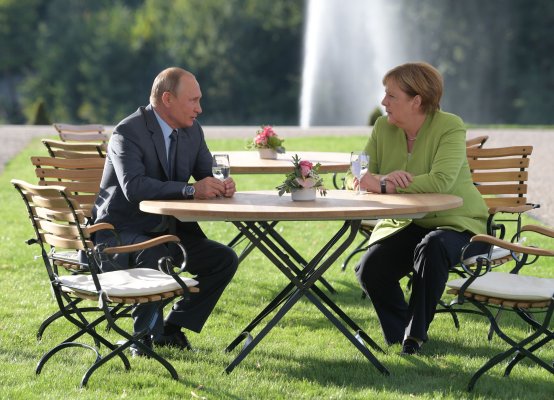 Putin to Merkel: Refugees Are a 'Burden on Europe'
Next Up: Editor's Pick