The internet is having a field day with a video of a Weather Channel reporter who appears to be struggling to stay upright against the wind in Wilmington, N.C. during what was then Hurricane Florence.

The reporter, Mike Seidel, used dramatic movements to seemingly keep his balance during a live shot on Friday. But then, two men enter the frame behind him and seem to have no trouble walking around.

One Twitter user — whose post has been retweeted more than 230,000 times — captioned the video: “So dramatic! Dude from the weather channel bracing for his life, as 2 dudes just stroll past.”

Hurricane Florence, which was downgraded to a tropical depression Sunday, is a serious and life-threatening weather event that has already killed 14 people, and Seidel seemed to really put on a show for his audience.

“This is about as nasty as it’s been,” he says, while bracing himself against wind that the others seemed to have few problems with.

The Weather Channel issued a statement to the Washington Post Saturday defending the reporter’s viral performance, saying he was “undoubtedly exhausted.”

“It’s important to note that the two individuals in the background are walking on concrete, and Mike Seidel is trying to maintain his footing on wet grass, after reporting on-air until 1:00 a.m. ET this morning and is undoubtedly exhausted,” the statement said.

Although Seidel was seemingly not in a dangerous situation, people in areas with warnings of flash floods, record-breaking rainfall and severe flooding should heed any and all weather warnings to stay as safe as possible.

In the meantime, the internet has given us all a good laugh during what is a difficult time for many, as Florence continues to wreak havoc on cities and towns up and down the East Coast. 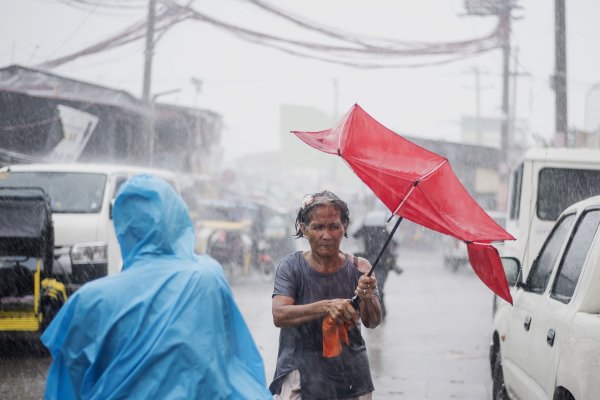 Photos From Typhoon Mangkhut's Path of Destruction
Next Up: Editor's Pick