(Bloomberg) — A new natural gas leak was discovered in the Boston area just two days after a series of pipeline explosions killed one person, injured more than 25 and prompted Massachusetts to declare a state of emergency.

The latest leak was confirmed just before 11 a.m. local time and firefighters were preventing people from walking in the area, the local CBS Television affiliate reported. Eversource Energy said the breach was unrelated to the recovery and restoration work it was appointed to carry out by Governor Charlie Baker.

Baker’s selection of the New England utility was a rebuke to NiSource Inc., which owns the pipeline system that erupted and was criticized by Baker for an inadequate response to the Thursday blasts.

“We heard one thing, and something else happened,” Baker said during a media briefing. Declaring a state of emergency gave the state authority to decide who would oversee the response, he said.

“There’s no one else who could have acted on this more rapidly than we did,” Bryant said.

NiSource lost 12 percent of its value on Friday for the deepest collapse in 16 years.

Columbia Gas has had seven violations totaling $100,000 since 2010, according to an email from Peter Lorenz, communications director for Massachusetts’s Executive Office of Energy and Environmental Affairs. The violations included inadequate gas standards, improper pressure testing and failing to follow procedures and federal pipeline safety regulations.

Lawrence Mayor Dan Rivera blasted Columbia’s response in a news conference Friday, saying the company was the “last to act” and accused the company of not wanting to “foot the bill.”

NTSB Chairman Robert Sumwalt told reporters in Washington the agency sent a “go-team” of investigators to the area. The inquiry will look at the design of the pipeline, any recent maintenance or upgrades, and the integrity of the management system, he said.

Leonel Rondon, an 18-year-old from Lawrence, died after an explosion sent a chimney crashing into his car, the Associated Press reported. Thirteen people were treated at Lawrence General Hospital for injuries, officials said.

One person remained in critical condition and was transported to a Boston trauma center, officials said during a press conference. Another was in serious condition, they said.

Columbia said in a statement that crews would visit each of the 8,600 affected customers to shut off gas meters and carry out safety inspections. Bryant said every home would be visited by the end of the weekend. As of 6 a.m. Saturday, crews had shut off 4,536 meters and it is anticipated that all would be shut by the end of the day, Eversource said in a tweet.

Since 2007, units of NiSource have had at least five explosions on pipeline networks, in Kentucky, West Virginia, Tennessee and Louisiana, according to news reports.

National Grid Plc, which operates the electric utility in the area, was asked to shut power to all of Lawrence, North Andover and pockets of Andover, spokeswoman Christine Milligan said. The supply cuts were affecting almost 15,000 customers as of 1 p.m., National Grid said on its website.

In April, Columbia Gas filed a petition with the state’s Department of Public Utilities to increase annual revenues by $24.1 million in part to help the company replace aging infrastructure. All three towns were listed as areas where neighborhood lines would be replaced, the utility said on its website Thursday.

“Replacing leak-prone infrastructure is a leading priority,” the utility said in April. “However, it will take a number of years to eliminate the aging pipe from the gas distribution system.” 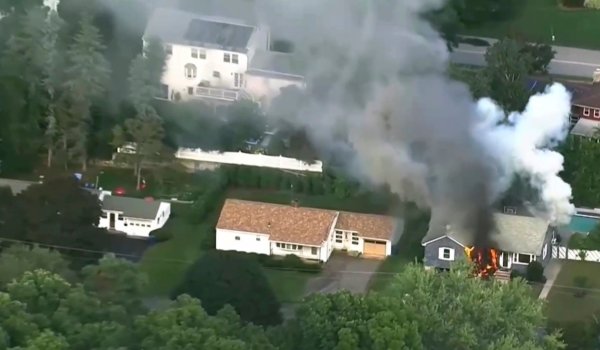