The Fourth of July Is America's Birthday, But Constitution Day Marks Its Coming of Age

The Signing of the Constitution of the United States, with George Washington, Benjamin Franklin, and others at the Constitutional Convention of 1787; oil painting on canvas by Howard Chandler Christy, 1940. The painting is 20 by 30 feet and hangs in the United States Capitol building. (Photo by GraphicaArtis/Getty Images)
GraphicaArtis/Getty Images
By Denise Kiernan and Joseph D’Agnese

Ask any person to name the single most important day in United States history, and they’re likely to answer July 4, 1776. Every year, Americans celebrate the signing of the Declaration of Independence by attending parades and watching fireworks. Most believe that the patriots defeated the British, as though in a football game, and then Americans lived happily ever after in blissful democracy.

Nothing could be further from the truth.

When the war ended in 1783, the United States was governed by the Articles of Confederation. This fairly flimsy compact provided for a one-house Congress, one vote per state, and very little else. True, this Congress had a president, but he didn’t derive his power from the people, and he was an intentionally weak figurehead. After all, the last thing the founding fathers wanted was another king.

Within two years, the fledgling United States was on the verge of political collapse. The federal government had no power to tax people, goods, properties or businesses. That may sound wonderful until you stop to consider all the consequences: The federal government had no revenue and issued no currency. There was no money for raising troops, building ships or engaging in other activities vital to a nation’s self-defense. The country was vulnerable to attack and domination by a host of foreign powers. At sea, American vessels were pirated by foreign ships; their cargo and passengers were frequently held for ransom. On land, British and Spanish factions were arming Native Americans and encouraging them to raid American settlements on the edges of the frontier.

States took matters into their own hands. Nine states had their own naval forces and pursued their own foreign policies. They imposed taxes on goods from other states as though they were disagreements between states. Private banks were issuing their own currency, but their notes were often distrusted and viewed as IOUs that might never be repaid. Doing business with other states was challenging if not impossible. Seesawing cycles of inflation and deflation were destroying lives. Foreclosures skyrocketed, and banks began seizing the homes of poor farmers with unpaid mortgages. Many wealthy landowners feared a bloody class revolution — or an all-out civil war.

Clearly something had to be done or the nation wouldn’t live long enough to celebrate its 11th birthday. Alexander Hamilton, James Madison and a host of other bigwigs proposed a “grand convention” at which delegates would gather to revise, debate and expand the Articles of Confederation. Seventy-four delegates were chosen by their respective states; only 55 answered the call, and many of those with skepticism. Patrick Henry, the famed Virginia rebel, refused to attend, complaining that he “smelt a rat.” Rhode Island sent no representatives at all.

In May of 1787, the willing participants journeyed to the very same Philadelphia building where the Declaration of Independence had been signed. True, these men had once banded together to fight as brothers against a common enemy, but now they were deeply distrustful of one another. Small states were suspicious of large states. The nation was divided over slavery. Every delegate arrived wanting something — but few were willing to sacrifice anything. In such a contentious environment, reaching compromise would be tough. More than a dozen delegates quit and went home before the convention’s end.

In the end, these men prioritized the welfare of their country over politics or personal advancement. They fought with great conviction — but they eventually came to understand that no single delegate could walk away with all the marbles. They agreed to compromise for the greater good. Yet, today, despite their heroic labors, most of them have lapsed into obscurity.

They deserve better — if only because their stories are so interesting. At least 22 of the signers served in the military — as soldiers, chaplains, administrative officers — during the Revolutionary War. Five were captured and imprisoned by the British. Many lost homes, property and loved ones to the war. Two died in duels; one attempted suicide.

Most were educated, cosmopolitan gentlemen accustomed to a life of wealth and privilege. Eighteen of the signers were trained in law; the remainder were merchants, plantation owners and financiers. They represented the views, expectations and entitlements of the nation’s elite. Such men had no problem ignoring the rights of women and slaves when designing their compact for government. Nor were they champions of free white men with meager property. (One signer sought to restrict government service to men with a net worth exceeding $100,000!) Having witnessed intimidation and mob violence at the hands of enemies and patriots alike, many of the signers didn’t trust the American public. The idea of granting power to all individuals was a fairly radical idea. During debates, many signers repeatedly derided the notion that Josiah Q. Public could serve wisely in the House and Senate, or, heaven help us, the presidency.

But in the end, enough members knew that this attitude did not reflect the principles of the revolution they had just fought. They were gutsy enough to give the “little guy” a shot at power. Anyone could be president, anyone could be senator — even you.

So the next time September 17 rolls around, eat a hot dog, watch some fireworks and celebrate Constitution Day — that fateful date in 1787 when 39 sweaty men dressed in stockings signed their names to the United States Constitution. Remember how they argued, hoped, feared, persevered and, most important, compromised to create a lasting document that still governs today. July 4 may be remembered as the day the United States was born, but September 17 marks the country’s passage into adulthood, laying the groundwork for two centuries of remarkable expansion and spectacular achievements.

Adapted from Signing Their Rights Away: The Fame and Misfortune of the Men Who Signed the United States Constitution by Denise Kiernan & Joseph D’Agnese. Reprinted with permission from Quirk Books. 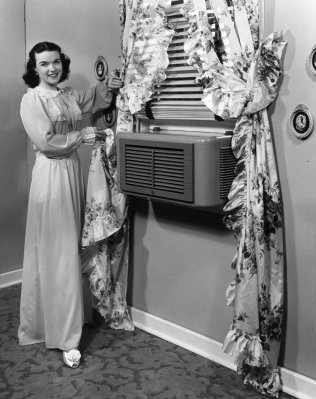 What the History of Air-Conditioning Tells Us About the Difficulty of Tackling Climate Change
Next Up: Editor's Pick