The Military Says It's Ready For Hurricane Florence. What Did It Learn From Puerto Rico?

As Hurricane Florence barreled into the shores of Wrightsville Beach, N.C., early Friday, Americans braced for destruction that will effectively shut down daily life across the Southeastern United States in the coming days.

The U.S. military says a massive relief effort is ready to sweep into affected areas to deliver food and water, conduct search and rescue missions, as well as provide medical care and restore power. Pentagon officials said the strategy was developed, in large part, to the lessons learned from hurricane response efforts mounted last year.

Florence was downgraded to a Category 1 story late Thursday, and now contains maximum sustained winds of 90 mph with higher gusts. The National Hurricane Center said rainfall totals exceeding 14 inches have been reported at several locations across southeastern North Carolina as of 11 a.m. Friday. But the center is still warning of life-threatening storm surges, with as much as 11 feet of ocean water expected to cover the North Carolina coast at some seaside locations.

The slow-moving storm is expected to linger over the Carolinas, causing government authorities to worry that heavy rainfall, rather than high winds, will pose the largest hazard. Florence is already causing power outages, with the U.S. Energy Department reporting that nearly 400,000 customers have lost power in North and South Carolina.

Projections have shown that 1 to 3 million people may lose power for weeks. Although the expected damage is a far cry from what hit Puerto Rico, where a destroyed electrical grid left the island dark for months, federal authorities have pre-positioned equipment to flow in once the storm passes.

The effort comes as President Donald Trump fends off criticism about how his Administration dealt with the hurricane response in Puerto Rico, a humanitarian disaster where some 3,000 people are estimated to have died.

“We did a detailed lesson-learned process, as we do post- any significant event, in the Department of Defense,” said Kenneth Rapuano, Assistant Secretary of Defense for Homeland Defense and Global Security. “And what we got out of that assessment is we have processes in place, for example, to develop a common operational picture that we share with all DoD entities and with our federal partners.”

The Army Corps of Engineers has more than 160 personnel working with Federal Emergency Management Agency and local authorities in anticipation of the damage. Unlike the island of Puerto Rico, where there was no land access, convoys of electrical repair vehicles from all over the country are driving into various points in the Southeastern U.S. — just outside where the “hurricane will have the most impact, ready to go in,” Rapuano told reporters Thursday at the Pentagon. There are also staging areas with 105 generators to provide temporary emergency power support.

That’s another key difference from Puerto Rico, military officials say. The military has the benefit of using its own bases, such as Fort Bragg in North Carolina, to pre-position relief supplies and equipment. Fort A.P. Hill, Virginia; Joint Base Bragg, North Carolina; North Auxiliary Airfield, South Carolina; and Maxwell Air Force Base in Alabama are staging areas for FEMA. In Puerto Rico, much of the material had to be flown or shipped in — which didn’t happen for more than a week, in some cases — and then had to be distributed by people who were also victims of the storm.

In all, the U.S. military said it positioned about 9,600 U.S. service members, including 6,570 National Guard personnel, at various bases across the Southeast, along with helicopters and high-wheeled vehicles, in order to mount Hurricane Florence relief efforts. Meanwhile, U.S. Navy ships, including the USS Kearsarge and USS Arlington, are now at-sea with supplies and will return to shore to help support the emergency response.

The deployment is, thus far, dwarfed by the one needed in Puerto Rico, which involved 17,000 troops and 82 aircraft. However, the military is much better geographically positioned to handle Florence relief, according to Air Force Gen. Terrence O’Shaughnessy, commander of North American Aerospace Defense Command and U.S. Northern Command, which will oversee operations.

“We have quite literally surrounded the expected affected area,” he said. “North Carolina, South Carolina, Virginia and Georgia are all home to well-known military bases and installations, and the secretary of defense is given authority for life-saving and life-sustaining actions in order to make DoD capabilities immediately available, and local commanders are proactively positioning forces and equipment to be ready.”

One of the issues that were improved from last year, O’Shaughnessy said, is information-sharing procedures “between FEMA, between the governors” to better understand the “needs” of each state. A January report from the Center for Army Lessons Learned found that FEMA and the military were not always “aligned and synchronized.” This matter was of particular concern last year when critics said the military should’ve stepped up to take over some responsibilities in Puerto Rico from FEMA, which was stretched thin by its simultaneous responses to hurricanes Harvey, Irma and Maria.

O’Shaughnessy said the military was prepared to move quickly once state and local authorities request support. He added that Hurricane Florence poses a challenge because it is expected to drift over hard-hit areas.

One concerning issue, he said, is whether persistent rain and high wind will preclude search and rescue helicopters from being able to operate “in the hours immediately after the storm hits.” Some 1.7 million people have been ordered to evacuate across the East Coast and around 10 million are under hurricane watches.

“This particular storm is going to be challenging because of its slow-moving nature,” he said at the Pentagon. “It could very well stay with high winds, inclement weather for a long period of time, which is going to mean that any rescue effort is going to take time.” 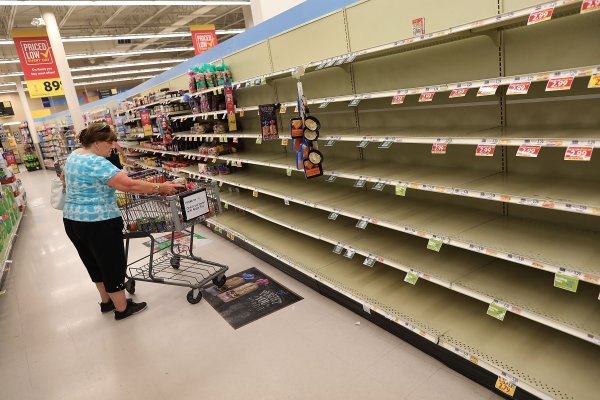 North Carolinians Cleared the Shelves Ahead of Hurricane Florence
Next Up: Editor's Pick