Denise Gough stars as Missy and Keira Knightley as Colette in the movie 'Colette'.
Robert Viglasky—Bleecker Street
By Olivia B. Waxman

It’s easy to fall into the trap of thinking that relationships that defy society’s conventions are distinctly modern. But, though terminology and public awareness certainly evolve, questioning the norms of sex and gender is not just a 21st century phenomenon. For proof, look no further than the French author Colette, one of the early 20th century’s most famous writers and the subject of an eponymous biopic opening Friday.

Today’s audiences may know her name from her best-known work, the novella Gigi, which was made into a 1951 Broadway musical starring a pre-fame Audrey Hepburn — who was discovered by the author herself — and then an Oscar-winning 1958 film. But this new movie Colette, starring Keira Knightley as the writer, focuses on her early days and her colorful love life, which would provide material for the 50-plus novels that she wrote about what TIME once called “quietly desperate women in love and in bed.”

Born Sidonie-Gabrielle Colette in 1873 in the French countryside in Burgundy, she was 20 years old when she fell for Henry Gauthier-Villars, a 34-year-old friend of her father, played by Dominic West in the film. Under the pen name Willy, he maintained “a factory of ghostwriters” says Judith Thurman, author of the biography Secrets of the Flesh: A Life of Colette.

Soon, Willy’s wife had joined the ghostwriting team. TIME once described him as “a potboiling hack” but he proved a decent editor and teacher as she dove into the profession. Toward the end of the 19th century, facing writer’s block and a lack of funds, he told her to write about her school days. The result was the book Claudine at School, published in 1900. It was a massive hit and kicked off a best-selling four-book series. In it, “she creates the first modern teenager character,” argues Thurman.

“Like most restless and intelligent adolescents, Claudine seeks knowledge for its own sake,” TIME noted in a review of a later edition of the book. “For her, adult behavior is neither good nor evil. It is just continuously absorbing, as the sex life of a lemming might be to a biologist. Similarly, Claudine punches and teases little Luce Lanthenay [a classmate] merely from a clinical desire to discover the effect of such cruelty on herself. All her hyperthyroid activity has but one goal: to make things happen and then study the results.”

The more popular the books got, the more the couple quarreled over adding her name as an author. They eventually agreed to “Willy and Colette Willy.” Publishers wouldn’t remove his name from the series until well after his death in 1931, according to Thurman. But Colette’s talent was recognized during her lifetime, and she became better known as a solo author as soon as they separated, eventually becoming the first woman President of a prestigious Paris literary society, the Academie Goncourt.

And while TIME once characterized her as a “below-the-belt” writer, it wasn’t just the characters in her novels doing the carrying on. As was typical for “upper-class and bohemian French marriages” of that period, Willy dated other women — and so did she.

“In the beginning, Colette was wildly jealous of Willy’s other women,” says Thurman. “Eventually she accepted his infidelity as incurable, she got Parisianized, and started having dalliances with women, but not with men. Down the road, about five or ten years, their marriage was open on both ends, and Colette proposed that rather than divorce, they go on that way. Willy didn’t want to by then.”

One of the women she dated when she and Willy separated was the niece of Napoleon III, the Marquise de Belboeuf (sometimes spelled Belbeuf), Mathilde de Morny, known as “Missy.” Missy was a prominent figure in society known for wearing men’s clothing — she might have identified as transgender if she’d lived in 2018, Thurman argues, but that terminology didn’t exist at the time — and they shared a controversial kiss onstage during the pantomime Rêve d’Égypte at the Moulin Rouge in 1907, in a period during which Colette was supplementing her income as a dancer.

Then she married again, to the diplomat Baron Henry de Jouvenel, but her love life continued to be a source of inspiration for her work. For example, at the age of 47 she seduced her 16-year-old stepson Bertrand, a series of events that sounds similar to the plot of her book Cheri. Though the real Bertrand’s age lends those events a sinister side, TIME’s coverage of the book shows that audiences at the time might have considered the idea of their age gap merely salacious. In a 1929 review of Cheri — about an 18-year-old man who takes up with his mother’s friend, a woman 24 years older — TIME described her style as “distinguished for presenting the human side of animals, the animal side of humans.”

“Colette has increasingly become: purveyor to those who like mild aphrodisiacs in print,” TIME wrote in 1932, in a review of The Ripening, joking in a footnote that said category was a “euphemism for 99.44% of all readers.”

Those themes continued throughout her career. “The world of a Colette novel is like no other world in contemporary fiction,” TIME summed up toward the end of her life. “It contains no murderers, no politicians, no proletariat, no religion, no problems of intellect or ideals. All that matters in a Colette novel is what happens when, as [prominent gay writer Glenway] Wescott puts it, ‘unimpeachable male supremacy’ comes to grips with ‘absolute female desirability.'” In a 1931 review of The Gentle Libertine, TIME described her as “famed in France as Foremost Woman of Letters” who, “though she did not invent the Modern French Woman in fiction… is credited with supplying ‘the organs, the accuracies, the mind and the heart.'”

In her obituary, TIME reported that the Roman Catholic Church “denied her its rites,” given she was a two-time divorcée; the New York Times obit printed all of the names she took on through the years as Sidonie Gabrielle Claudine Colette Gauthier-Villars de Jouvanel Goudeket.

The length of her name was just one sign of the fullness with which she’d lived. As TIME wrote in her obit, “she died a revered national institution, yet fulfilling in every way the wish that she herself had many years before expressed: ‘And when you lie down across the dizzying, wavy path, if you have not already shed your curly locks one by one, nor one by one your teeth, if your limbs have not worn out one by one, if the dust of the world has not, before your last hour, sealed your eyes from the marvelous light, if you have, right to the end, kept in your hand the friendly hand which guides you, lie down smiling, sleep happily, and sleep privileged.'” 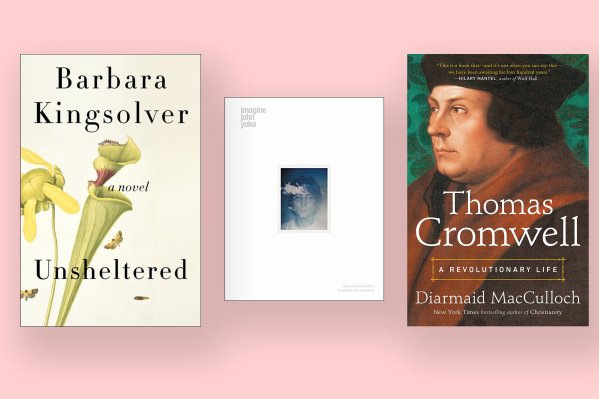 13 New Books Everyone Will Be Talking About This Fall
Next Up: Editor's Pick