The powerful storm system, which was downgraded to a tropical storm Friday evening, officially made landfall at 7:15 a.m. in Wrightsville Beach, N.C. as a Category 1 hurricane with 90 mph sustained winds and torrential rains. Forecasters warn Florence will bring “catastrophic freshwater flooding,” according to the National Hurricane Center, after dropping more than two feet of rain on the Carolinas ahead of a life-threatening storm surge.

By 5 p.m. Friday, the storm had dropped to 70 mph sustained winds, as it traveled West at a speed of 3 miles per hour. The storm is expected to travel inland across southeastern North Carolina and eastern South Carolina from Friday into Saturday.

North Carolina Gov. Roy Cooper said Friday that damage from the storm will be extensive. “For overall damage, it will be hard at the end of the day to find a rival to the storm,” he said. “We’ve got a lot of work ahead of us.”

He added: “Our focus now is getting people away from danger.”

President Donald Trump is expected to travel to areas affected by the storm next week “once it is determined his travel will not disrupt any rescue or recovery efforts,” White House Press Secretary Sarah Sanders said Friday.

Here’s what to know as Tropical Storm Florence as it makes its way across the Carolinas:

Among the first fatalities reported were a mother and her baby, who died when a tree fell onto their home, Wilmington police said. The father, who sustained injuries, was transferred to the New Hanover Regional Medical Center.

Officials in Pender County said a woman died in Hampstead, N.C., after first responders were unable to reach her after she requested emergency services for a heart attack. First responders weren’t able to reach her in time due to fallen trees that blocked roads, according to Tammy Proctor, a spokesperson for Pender County, where Hamsptead is located.

“Emergency crews were not able to get to her because of all the downed trees in the roadway,” Proctor said in a statement. “They were using a front end loader to clear the roads. During that, a tree went into the windshield of that equipment.”

The Associated Press reports another person died while plugging in a generator, according to the governor’s office. The North Carolina emergency management department on Friday warned people not to operate generators if their power goes out.

As Hurricane Florence landed in North Carolina Friday morning, calls for help from people trapped in their cars, in their attics and on rooftops poured in.

In New Bern, North Carolina – where forecasters say the Neuse River could experience 11 feet of storm surge — more than 150 people were reported to be trapped late on Thursday. The city’s official Twitter account urged residents to move to the upper floors of their homes.

“WE ARE COMING TO GET YOU,” New Bern said.

By Friday morning, Craven County — where New Bern is located — had already received more than 100 calls from people who said they were trapped in their homes and in vehicles, public information officer Amber Parker tells TIME. Some residents have reported that they are trapped in their attics and on their roofs as storm surge has flooded the lower levels of their homes.

Five county swift-board teams as well as the “Cajun Navy” from Louisaiana are attempting to rescue everyone they can.

“But with conditions with the way they are, there are some area where it’s just not safe to perform rescues,” Parker says. She adds: “You have wind, high water, rushing water, downed trees and downed power lines – not to mention it’s dark out.”

All of the areas where calls for help have come were under mandatory evacuation orders beginning at 2 p.m. on Tuesday. And this is just the beginning, Parker says.

“Right now we have extreme flooding and storm surge. We have wind and rain. We have Hurricane Florence just sort of hovering over the area right now and we expect it to continue doing that for some time,” she says.

The storm is moving inland at a speed of 5 mph and conditions are likely to deteriorate as it pushes its way southwest along the coast Friday through Saturday. The center of the storm is expected to move further inland across southeastern North Carolina and eastern South Carolina in a west-southwestward direction.

Florence was downgraded from a Category 1 hurricane to a tropical storm Friday evening, and now contains maximum sustained winds of 75 mph with higher gusts. But the National Hurricane Center is still warning of life-threatening storm surges, with as much as 11 feet of ocean water expected to cover the Carolina coast.

Rescue workers from Township No. 7 Fire Department and volunteers from the Civilian Crisis Response Team use a boat to rescue a woman and her dog from their flooded home during Hurricane Florence in James City, NC on Sept. 14, 2018.
Chip Somodevilla/Getty Images

Authorities’ main concern with Tropical Storm Florence is massive storm surge and extremely heavy rainfall, rather than high winds. As the slow-moving storm moves over the Carolinas, it could pummel towns with more than 3 feet of rainwater.

Jim Trogdon, the North Carolina transportation department secretary, said residents should expect a 500 to 1,000-year flood event. Trogdon warned people not to travel on flooded roads, and said several roads in Pamlico and Craven counties are flooded. Most of the flooding comes from storm surge, he said.

The National Weather Service warned Friday of the threat of long-term river flooding well inland as rainfall continues from the storm. The flooding will come in addition to the storm surge and flash flooding expected along the coastal region.

“This storm will be a marathon vs. a sprint,” NWS tweeted Friday.

Accuweather Hurricane Expert Dan Kottlowski said that residents near Wrightsville should expect to continue to get very heavy rainfalls throughout the weekend.

“There is potential for several more inches of rain, probably well over 2 feet of rain before all is said and done,” Kottlowski tells TIME. “Rainfall totals change dramatically, there are now reports of close to 18 inches.”

“The storm is still going on so there is no way to say if this is potentially the biggest rainstorm in the U.S, but it is very possible Florence could set record rain totals in North Carolina.” he said.

“The important thing here is that Florence is doing what we predicted it would,” he said. “It’s crawling and slowing down so that area is going to see two to three more days of rain.”

He said the constant downgrades to the storm system can be deceptive, and that storms whose wind speeds slow down still cause major damage in terms of storm surges and flooding, the biggest danger to people.

“Category refers to wind,” he said.”and that is just one component of a hurricane. More people die from storm surge than any proponent of hurricanes. Florence may be weakening but will have large storm surge.”

Cooper said the state can expect “several more days of rain.” About 200,000 North Carolina residents have relocated to more than 100 shelters, he said.

Clemmitwykie Green, 36 of Jacksonville, North Carolina says he and his family did not have a way of evacuating because their truck is broken down. And because his 59-year-old mom didn’t want to leave town, he didn’t want to leave without her. So Green, his wife and two kids — one 5-years-old, the other three-months old — are still in town.

Green, who walked two miles to his mom’s house around 2:30 p.m. on Friday in order to check on her, tells TIME he was unable to find her, and assumes she was evacuated from the area.

“My uncle had told me that the last time he spoke to her was 12 this morning. No one has been able to get in touch with her since because the power went out,” says Green, who called 911 but was not sure if anyone was able to reach his mom.

Green says he now has to figure out how to get back home without encountering police because Jacksonville has a curfew in place. The curfew which started 7 p.m. Thursday goes until 7 a.m. Sunday, restricts people from going out in public.

More than 60 people were evacuated from a hotel in Jacksonville after police received a 911 call just before 1 a.m., the city’s public safety department said in a statement.

An officer inspecting the Triangle Motor Inn found a “basketball-sized hole” in a corner room and firefighters said the building had suffered life-threatening structural damage.

Jacksonville Public Safety spokesperson Beth Purcell tells TIME that flood waters have not yet reached Jacksonville, but that conditions are “very poor.”

Bill Saffo, Mayor of Wilmington, near where the hurricane hit, told CNN he had never seen a storm stay over his town as long as Florence is forecast to. “I’ve lived here all my life. I have never seen a hurricane that is literally going to be with us for two days,” he said.

At least 1.7 million people have been ordered to evacuate across the East Coast and around 10 million are under hurricane watches.

The impact of the storm is already being felt by those caught in its path.

On social media, people caught in the storm are posting dramatic videos of flooding and high winds. By midnight, Amy Johnson in Belhaven, North Carolina, on the Pungo River posted a video of raging floodwaters that had inundated the first floor of her home.

The NWS shared images of Union Point on the shore at New Bern before and after the storm surge hit.

The NWS reported “lots of tree damage, debris and power lines down” across Harkers Island, N.C.

Cooper said about 500,000 residents are without power as of Friday morning.

Earlier in the day, Duke Energy reported nearly 240,000 customers have lost power in North and South Carolina – but said 1 to 3 million people could lose power. 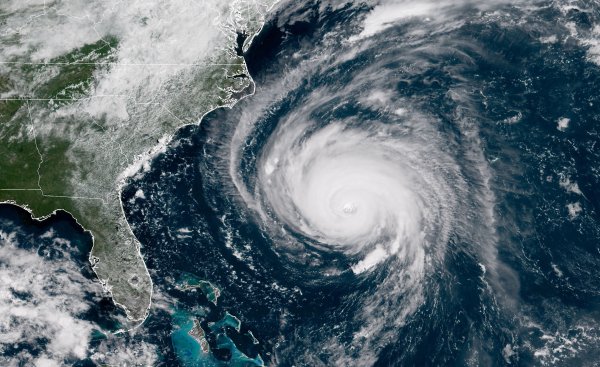 Don't Be Fooled by Hurricane Florence Being 'Downgraded.' It's Still Very Dangerous
Next Up: Editor's Pick