At 92, iconic jazz crooner Tony Bennett is still setting records. His latest: the timeless singer just nabbed a Guinness World Records title this week for “longest time between the release of an original recording and a re-recording of the same single by the same artist.” The song is “Fascinating Rhythm,” a beloved jazz standard. And the time? 68 years and 342 days, according to the Guinness adjudicator who presided over the record-setting.

“Fascinating Rhythm” was originally written by George and Ira Gershwin in 1924, and has been covered by music greats like Fred Astaire, Ella Fitzgerald and The Carpenters over the years, among many others. Bennett himself put out his original recording back in 1949 of the upbeat American Songbook tune. This year, he followed it up by including the song on his new album Love Is Here to Stay, a collaborative project between Bennett and jazz singer Diana Krall that comes out on Sept. 14. (Bennett also has a history of successful duet albums: 2014’s Cheek to Cheek with Lady Gaga topped charts and won Grammys.)

Over his lengthy career, Bennett has proved himself to be quite a record-setter; this is actually his third Guinness title. He was the oldest person to top a U.S. album chart, thanks to Cheek to Cheek; and he also received kudos as the artist with the longest time between U.K. top 20 albums, according to Universal Music Group. 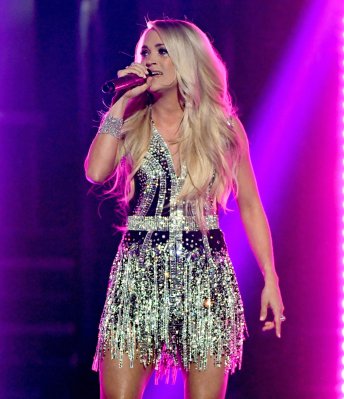 How Carrie Underwood’s Cry Pretty Pushes Her Out of Her Comfort Zone
Next Up: Editor's Pick