Across Europe, populism is growing on both the left and the right—but it has much more momentum on the right. In a sign of the political times, European Commission President Jean-Claude Juncker used his final State of the Union speech this week to denounce “unhealthy nationalism.” Here, five European countries witnessing the rise of the far-right:

No far-right movement presents a bigger threat to Europe than Italy’s anti-immigrant Lega. Some of that has to do with sheer size—Italy is the Eurozone’s third-largest economy, which means that any type of political upheaval domestically has outsized impact on the rest of the European continent. Some of it also has to do with the fact that Lega and its leader, Matteo Salvini, thrive on direct confrontation with Brussels.

Somewhere down the line, Lega will likely force new elections to capitalize on its recent popularity gains (as reward for its strong anti-migrant and anti-Brussels posturing, it’s seen its support nearly double since March elections). For the time being, Salvini is actively building bridges with other far-right parties across Europe; he has a long-established relationship with the Front National/National Rally in France, and has made overtures to Eastern European politicians that align with his anti-immigration stance.

And now that he’s teamed up with Steve Bannon, Salvini is eager to translate his politics into a pan-European movement ahead of European Parliamentary elections next year. It used to be that nationalist parties in Europe wanted nothing to do with the EU; now they’re aiming to take it over. “Changing Europe is a big goal,”Salvini told TIME in an interview this week. “But I think it is at our fingertips.”

But it’s important to put this in context. In the same election, Sweden’s center-left and center-right political groupings took 40 percent of the vote… each. Indeed, two parties that actually advocated for better integration of immigrants, the Left Party and the Center Party, picked up more new seats in Parliament together (15) than the Sweden Democrats did alone (14).

But neither the center-left nor center-right alliances have the seats to command a parliamentary majority outright. For the time being both sides have refused to work with the Sweden Democrats, but it remains to be seen whether they can continue to stand on principle as political realities begin to close in.

The AfD’s taking of 94 parliamentary seats out of 709 threw the country’s traditional political balances off-kilter; Merkel attempted to form a new coalition government with the Free Democrat liberals and the Greens, but was forced to return to her partnership with the flailing center-left Social Democrats after talks broke down. This “grand coalition” is by far the weakest government Merkel has ever helmed. Over the summer, the AfD even passed the Social Democrats in the polls.

But for the time being, the AfD’s real impact has less to do with their numbers in parliament than with the freedom it affords further-right elements within Merkel’s own party ranks to push back against her. Just a few months ago, Merkel’s coalition was facing an existential threat as the leader of the CSU (Merkel’s CDU counterpart in Bavaria), Horst Seehofer, threatened to collapse the government unless Merkel acceded to stricter immigration controls along Germany’s border. For the good of the country, Merkel ultimately relented… but made herself a lame duck in the process. Germany, whose economy continues to hum along, will be just fine with a weakened Merkel; the E.U. is another story.

French President Emmanuel Macron saw the direction that the anti-establishment winds were blowing and created an upstart political party (Le Republique En Marche!) to counter Marine Le Pen and her Front National’s far-right push with a technocratic, pro-European one of his own.

But Macron’s victory didn’t spell the end of France’s reactionary wing; far from it. While Le Pen failed to win the French presidency, she delivered a historic performance for France’s far right in the first round of presidential elections, capturing 21.3 percent of the vote in a crowded field. One of the reasons she fared so poorly in the second round was a disastrous debate performance against Macron; despite that, her brand of nationalist, anti-immigration politics still took 33.9 percent of the vote (10.6 million absolute votes).

Le Pen remains at the head of the party (rechristened “National Rally” in June), but the real person to keep an eye on is her niece, Marion Marechal-Le-Pen, who became an international political sensation in the runup to those 2017 elections. She has temporarily stepped away from politics, but is expected to return at some point and attempt to bridge the divide between National Rally voters and the more conservative elements of the traditional center-right Les Republicans. And she just might be able to pull it off: Macron’s sudden rise has so effectively blurred the lines of French politics that no one knows who exactly is the “opposition.” If Marechal-Le Pen is able to convince voters that Macron is Establishment in everything but name and her movement is the real way to shake things up, France—and Europe—need to watch out.

Then there are the the far-right leaders already in power. Following Juncker’s speech, the European Parliament moved to back up his rhetoric with action, voting to begin censure proceedings against Hungary and its far-right Prime Minister Viktor Orban. Orban has spent the last few years systematically undermining judicial independence in the country, targeting NGOs (particularly those backed by Hungarian-American liberal philanthropist George Soros) and stymying the country’s free press. He also refuses outright to accept the EU’s plan to redistribute asylum seekers across the political bloc. “The Hungarian people have decided that their country is not going to be a country of migrants,” he proclaimed to the European Parliament the day before the censure vote.

It’s precisely this type of defiance to Brussels bureaucracy that delivered Orban his latest electoral victory this past spring; it also gave his Fidesz party two-thirds of seats in Parliament, handing Orban the supermajority he needs to rewrite his country’s constitution and further push the country toward the “illiberal democracy” he champions.

And push it he will—suspending Hungary’s voting rights and leveling sanctions against it requires unanimity from the EU’s remaining members. Poland, which is lurching towards illiberalism itself, will likely veto any measures against Budapest, highlighting just how ill-equipped Europe is to punish member states that step out of line. That won’t change anytime soon.

Ian Bremmer is president of Eurasia Group and GZERO Media, and host of “GZERO World with Ian Bremmer” on public television. 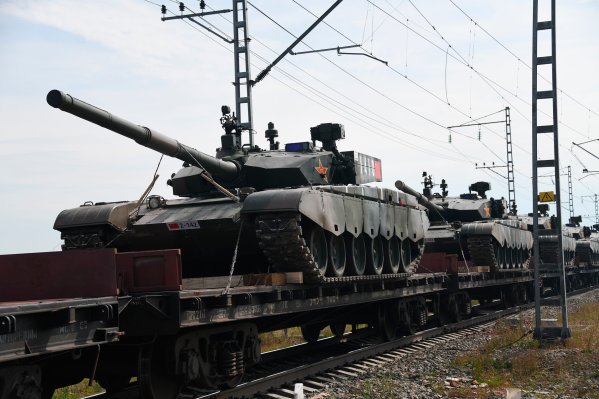 China May Meet Russia for War Games, But That Doesn’t Make Them Allies
Next Up: Editor's Pick