Students and protesters surround the plinth where the toppled statue of a Confederate soldier nicknamed Silent Sam once stood on the University of North Carolina campus, after a demonstration for its removal in Chapel Hill, North Carolina, on Aug. 20, 2018.
Jonathan Drake—REUTERS
Ideas
By Heather Mac Donald
Mac Donald is a fellow at the Manhattan Institute and the author of the newly released The Diversity Delusion: How Race and Gender Pandering Corrupt the University and Undermine Our Culture.

“You have blood on your hands. You’re a murderer,” shouted one of the protesters at Judge Brett Kavanaugh during the Senate hearings of his nomination to the Supreme Court. This apocalyptic rhetoric had been espoused before — at none other than the Yale Law School, immediately after President Donald Trump announced the school’s graduate as his chosen replacement for Justice Anthony Kennedy. There, a group of alumni and professors circulated an open letter declaring that selecting Kavanaugh “presents an emergency — for democratic life, for our safety and freedom, for the future of our country.” People “will die” if Kavanaugh is confirmed, the letter announced. By the time of the hearings, Kavanaugh had gone from being a future murderer to an actual one.

These protests, intended to shut down the proceedings — and the fantastical social-media charge that one of Kavanaugh’s former clerks displayed a white-power sign during those hearings — showed how academic identity politics is transforming the non-academic world. To be sure, there were differences: the Capitol police actually intervened to restore order and the Judiciary Committee is ideologically balanced. But the long-term prognosis for reason and civility is not good.

The key feature of academic diversity ideology is the assertion that to be a member of an ever-growing number of favored victim groups at a college today is to be the target of pervasive bigotry on campus — despite, well, being favored. Taught by a metastasizing campus-diversity bureaucracy to believe that they are subject to an existential threat from circumambient bias, students equate nonconforming ideas with “hate speech,” and “hate speech” with conduct that should be punished, censored and repelled with force if necessary. This victimology fuels the efforts to shut down speech that challenges campus orthodoxies. Dozens of times in the past several years alone, classrooms have been invaded; professors, accosted and even assaulted; and outside speakers, silenced.

While these tactics have famously been directed at conservatives, that is not exclusively the case, as senior fellow at the Public Policy Center Stanley Kurtz has documented for National Review Online. It has happened year after year, recently.

In October 2017, protesters at Columbia University temporarily occupied a class and accused a professor who is an LGBTQ rights advocate and one of the school’s premier proponents of the idea that campuses are pervaded by rape culture of creating a “dangerous environment for students, including queer students.”

That same month, shouting activists prevented University of Oregon President Michael Schill from delivering his State of the University Speech. Schill’s merely pro forma support for free speech was enabling “fascism and white supremacy,” according to the student protesters.

In November 2016, Kimberly Peirce, director of the groundbreaking 1999 film on transgenderism, Boys Don’t Cry, was shouted down at Reed College with slogans like “f-ck your respectability politics.”

Dozens of Yale students mobbed sociologist Nicholas Christakis for three hours in October 2015 because his psychologist and faculty member wife had circulated an email suggesting that students could select their own Halloween costumes without oversight from Yale’s diversity bureaucrats. “Be quiet!” shrieked a girl at Christakis, who was frozen in his place. “You should not sleep at night! You are disgusting!” Another mobster complained that Christakis’s invocation of free speech creates “a space to allow for violence to happen on this campus.” When he meekly disagreed, the protester shouted back: “It doesn’t matter whether you agree or not … It’s not a debate.”

The list goes on — from Rutgers in New Jersey and American University in Washington, D.C., to U.C. Berkeley in California and Evergreen State College in Washington and beyond. In none of these instances were the silencers disciplined. In several of them, the college presidents thanked the anti-speech advocates for their courageous stands. Yale conferred its prize for “provid[ing] exemplary leadership in race and/or ethnic relations” on two of Christakis’s scourges, including the student who shouted, “It’s not a debate.”

The belief that college campuses today pose an existential threat to females and students of color is just as lunatic as the belief that Judge Brett Kavanaugh is a murderer or that an Establishment lawyer was signaling her white supremacy affiliation on live TV. American universities are among the most tolerant environments in history towards humanity’s traditionally oppressed groups. Far from discriminating against what admissions officers call “underrepresented minorities,” or “URMs,” every selective college today employs large racial admissions preferences to engineer what they call a “diverse” student body — and they twist themselves into knots to hire qualified minority staff members who haven’t already been snapped up by better-endowed schools. Professors want all their students to succeed, particularly females and “underrepresented minorities.”

But the resulting campus culture often coaches students to see bias where none exists. That delusion continues once they leave school. The result is a growing society-wide intolerance for speakers and ideas that fail to conform to an increasingly exacting code of political correctness, on the ground that such non-conforming speech harms favored victim groups.

The right has its shrill manias— whether the unseemly obsession with Hillary Clinton and her emails, the corrosive Trump-fueled calumny that federal law enforcement agencies have been corrupted by political bias, and the dangerous Trump-induced crusade to turn those agencies into instruments of political revenge. But until now, the notion that silencing non-conforming speech is a legitimate response to disagreement has come overwhelmingly from campuses and other progressive institutions — from Google to the New Yorker. Were Trump to seize the same weapons, arrogating to himself the power to define and punish “hate speech,” the danger of such precedents might become clearer to all.

The new censorship is an outgrowth of the twin ideas that race and gender are the most important features of a human being, and that American society is one long assault on various identity groups defined by race and gender. Until these key tenets of academic identity politics are rebutted, we can expect to see more of the hysteria that characterized the Kavanaugh hearings — and less ability to talk across ideological divides. 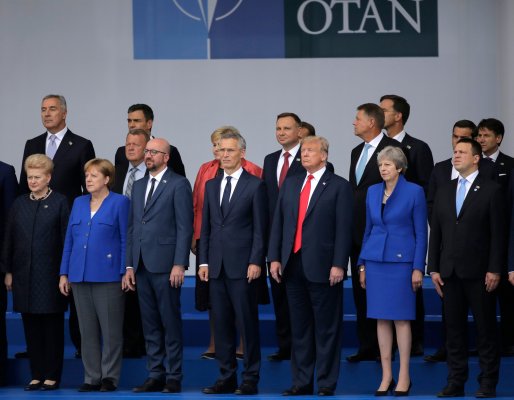 Allies Are Doubting How Long President Trump Will Stay in Power. Here's How to Stop Irreversible Damage
Next Up: Editor's Pick