My Daughter Was a Rising Politician in Brazil. Six Months After Her Murder, Why Are Her Killers Still Free?

A makeshift memorial is pictured during a protest of Brazilian expats against the killing of Rio de Janeiro's left councilwoman and activist Marielle Franco in Berlin, Germany on March 18, 2018.
NurPhoto/ Getty Images
Ideas
By Marinete da Silva
Marinete da Silva is a lawyer and the mother of Marielle Franco, a Rio de Janeiro city councillor who was killed on March 14, 2018.

Six months ago, we were stabbed in the heart. The murder of my daughter, Marielle Franco, in the center of Rio de Janeiro on March 14, left an immense void—one the size of Marielle’s presence in our lives. My family hasn’t been the same since that night, nor has that of her driver Anderson Gomes, who was also murdered. No one can prepare themselves for the loss of a daughter. Every day I ask myself what an elected city councillor and well-known human rights defender can have done to generate so much violence. I still have no answers.

From a young age, Marielle stood out from the crowd. She was a natural leader at school, at the church and in the projects she took part in. She was involved in community vegetable gardens, college preparatory courses for the underprivileged and movements against violence, always with the aim of helping others. She believed that collective organization based on solidarity could change the world. Doing things for others made her feel good. Her sense of responsibility was so great and she dreamed so big that, in 2016, she decided to stand for public office as a city councillor in Rio de Janeiro, the second largest city in Brazil.

Her campaign was one of the most beautiful experiences in the city’s political history. It involved black women, feminists, young people and residents of the favelas. She received the fifth most votes and the second most in her party. Marielle was unique in the way that she stood up not just for minorities, but for everyone.She succeeded in taking a human rights movement into parliament at a time when the Brazilian population had lost its faith in institutional politics. It was the start of a transformative process.

My daughter’s life was cut short. It was clear that she was destined to rise to another level in public life. Many believed her future would be in the capital, Brasília—the necessary political path to further the collective interests that she believed in and represented so coherently. But since her murder, Marielle has risen even further, her influence spreading to the wider world. Thousands of people have taken to the streets in different capitals, speaking out through various channels and in various languages. Because of a tragedy, my daughter has become much more widely known than anyone expected.

Six months have passed since the brutal crime that took my daughter’s life and we still don’t have any answers. I went to Italy to meet Pope Francis to tell him Marielle’s story and ask him to reiterate our call for justice. Each month we appeal to the different authorities responsible for the investigation to solve the crime. Meanwhile, in the streets, people express affection, and embrace me. They are girls for whom Marielle is a role model; they wear my daughter’s picture on their chests as badges or stickers wherever they go. While all the support in Brazil and around the world will not take away our pain, it motivates us to keep pursuing justice.

Giving support to those who most needed it was the central thread of my daughter’s story. Marielle dedicated part of her existence to supporting mothers at the most difficult time in their lives, when they were feeling the pain of having lost a child in a violent way—many of them killed by agents of the state who should have been protecting them. She was fighting a flawed public security policy that kills thousands of young black people every year. Today, those mothers have been sharing that feeling with me. My pain is more recent, but it is just as great as theirs. Mothers visit and call me daily, want to know how I am, and encourage me to keep my head up. My daughter did that for them and now they are doing it for me.

I will never forget the warmth I have received. I feel Marielle’s presence in every gesture of solidarity—solidarity that leads to the hope of clarifying what motivated someone to commit such an atrocity that night. Marielle worked to hold the system to account and it bothered people that she was a black woman from the favela who dared to be in a space that has not historically been occupied by people like her.

Today, I feel we are winning because we are resisting and mobilizing with Amnesty International and activists around the world. With each passing day, international recognition of the example set by my daughter is growing and is transformed into a fight for justice, to hold the Brazilian state to account. Marielle was a gentle woman, an example of how the fight can be carried out with love. She inspired wherever she went. She was a human rights defender who dedicated her life to doing good. We need to know who killed my daughter and who ordered her murder. My family will not rest until we have answers about this crime.

Marinete da Silva is a lawyer and the mother of Marielle Franco. 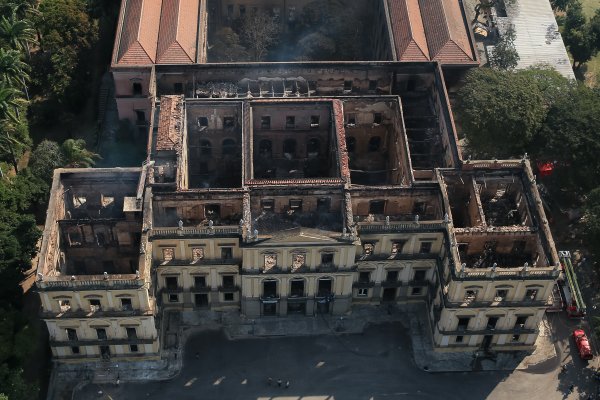 Here's What to Know About Brazil's National Museum Fire
Next Up: Editor's Pick