The first music you ever performed was Bach, and now you’re playing his cello suites on a solo tour and recently released an album of his compositions. Why do you keep returning to him?

At each stage of your life, you go back and discover new things. The way I understand Bach now is with the analogy of a river. It’s like you’re touching a living stream of water that keeps flowing, and by touching it or listening to it or playing it, you are in touch with something much bigger than yourself. It changes from day to day, from season to season and from year to year.

A pillar of your tour is the concept of a “culture of us.” What does that mean?

Culture can no longer just be tribal. Because what we each do–which we think benefits us in the short term–actually impacts all of us in the long term. What can we do together that we can’t do alone? I’m committing to going to these 36 communities and getting to know them, connecting with their most vulnerable citizens and the citizens who are helping one another. In Denver, we celebrated an initiative to give musical instruments to every child in the state. Now that’s pretty cool.

Does being an immigrant influence your music?

We’re all immigrants, right? The First Nation people were immigrants. But what the immigrant perspective means is you know at least two places very well, which means you can actually put two places in your head at the same time. That’s what builds imagination. I need only point out that Google and Apple have co-founders that are either immigrants or first generation. That immigrant imagination allows them to see further into possibilities that don’t really exist yet.

Is there still a place for classical music in pop culture?

Things will continue to exist if people care. The percentage of calcium in our diet is probably .00001%–but tell me we don’t need calcium. I think we live under the false premise that what is quantifiable in terms of maximum percentage has got to be good. I view music the way a health-sciences person looks at DNA. Music is organized sound. It’s like how the writer looks at the alphabet. Basically, is there room for more words in the world? Is there room for poetry? Is there room for novels? Is there room for rap?

You’ve performed for many Presidents over the years. Would you perform for Donald Trump?

The times I’ve performed for a President usually were state dinners. You had people from all sides of the aisle put their best selves forward. This is an incredibly important habit for all of us to practice because if you can’t talk to one another, how can you work toward a common goal? If democracy is the result of discussion, how can you stop discussing?

Then would you play for Trump?

Civil discourse is so important–it’s the basis of what allows a civilization to function. It’s not about winning. The cultural part is about understanding.

You’ve said this album is your last recording of Bach. Is this tour a victory lap?

I don’t have any plans for immediate demise. I’m not suffering from an illness that is fatal, other than being alive. I’m committed to thinking about cultural and social impact because that’s what I feel we need in the world at this time: to make sure that culture has an equal seat at the table as politics and economics. Without that, politics and economics will fail. I don’t think there’s anything more important I can do, and I will devote the rest of my life to thinking in this way. 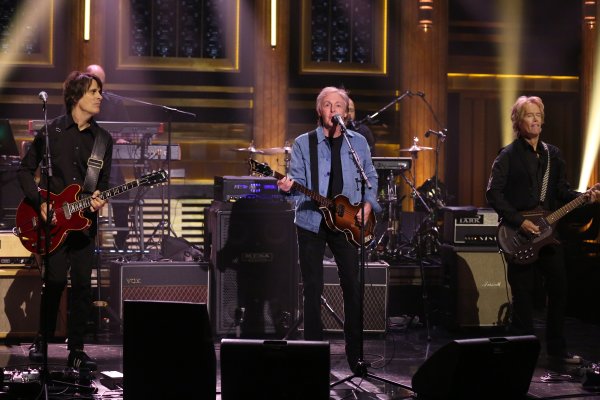 Paul McCartney Does Not Hold Back With His Response to That Quincy Jones Diss
Next Up: Editor's Pick