Blake Lively Is the Best Thing About the Silly Simple Favor

Last year’s soapy smash Big Little Lies taught viewers that nothing is creepier than helicopter parents in tony school districts. A Simple Favor, a nutty millennial mystery directed by Paul Feig (Bridesmaids, Ghostbusters), adds a few more cracks to that perfect facade. Anna Kendrick plays mommy vlogger Stephanie Smothers, who’s far from poised in her everyday life. Through a nervous smile, Stephanie makes friends with the chic, enigmatic Emily Nelson (Blake Lively), a gin-gargling mom who picks up her kid from school–on the occasions when she actually shows up–wearing flashy business suits that make her look like a hybrid of Scrooge McDuck and Britney Spears. Stephanie basks in the glow of Emily’s affection until the day Emily mysteriously vanishes; her whereabouts, and the involvement of her husband Sean (Crazy Rich Asians star and newly minted heartthrob Henry Golding), are just the beginning.

If A Simple Favor gave us more of Kendrick’s aw-shucks sarcasm and Lively’s surprising acidity, this might’ve been a dynamic comedy in the vein of Feig’s madcap Spy, which veered brilliantly between Melissa McCarthy’s self-deprecation and Miranda Hart’s cutting exasperation. But the movie aims to be a cheekier Vertigo, and even with a running time of almost two hours, it speeds too choppily through Stephanie’s detective work, relying instead on inelegant exposition. Stephanie does run into a couple of fun cutups along Emily’s paper trail, including Rupert Friend as a viperish fashion designer and the great Jean Smart boozing it up in an attic like a rejected suspect on HBO’s other recent gossipy thriller, Sharp Objects. It all makes for one of the more twisted, circuitous and silly capers in recent memory.

But the biggest pleasure from A Simple Favor is watching Lively, who was so searing in the taut thriller The Shallows and elevated 2016’s baffling All I See Is You. She’s a slyly versatile performer, capable of landing a killer punch line. When Lively dead-eyes the ever apologetic Kendrick and threatens to “slap the sorry out of you,” you laugh, sigh and practically feel the handprint on your own face. She’s fearsome and great–even when the movie is only tolerably absurd. 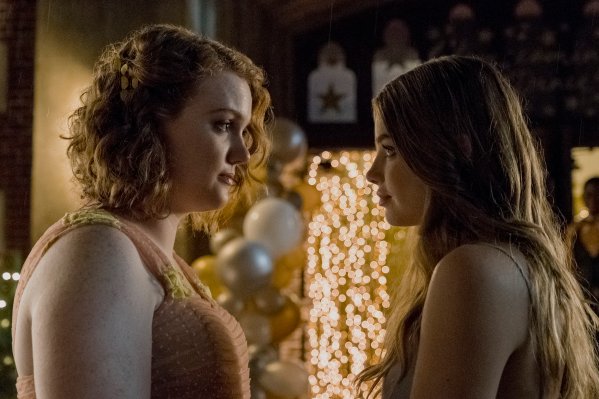 Sierra Burgess Is a Loser Is a Sweet, Smart Rom-Com
Next Up: Editor's Pick