Education Is a Top Issue in the Midterms

Education Secretary Betsy DeVos speaks during a Cabinet Meeting in the Cabinet Room of the White House on August 16, 2018 in Washington, DC.
Pool—Getty Images
By Molly Ball

Oklahoma isn’t anybody’s idea of a swing state–by any measure, it’s one of the most Republican places in the country. But a poll in July put the Democratic nominee for governor, Drew Edmondson, up by a point over his Republican opponent, 40-39. Edmondson thinks he knows why: “The policies of the last eight years have driven us into a billion-dollar deficit and created a terrible situation in our schools,” he tells TIME. “That’s what drove me into this race in the first place.”

All across America, public anger over education funding has scrambled the political map for November. The activism that started with this spring’s sudden wave of teacher strikes and walkouts didn’t ebb when the picket lines did. It got channeled into political action. The outcry has created competitive races–and spurred primary upsets–in some unexpected places. And with scores of teachers now running for office themselves, it’s changed the face of the midterm elections.

Edmondson, a former Oklahoma attorney general who worked for a year before law school as a high school teacher in Muskogee, spent the summer on an education-themed tour of the state. The dismal conditions highlighted by the teacher walkout helped make the outgoing governor, Republican Mary Fallin, the most unpopular in the country, with an approval rating recently measured at just 19%. In the GOP primary to succeed her, voters chose a political newcomer, Kevin Stitt, who criticized his establishment rivals over their records on education. And in Oklahoma’s state legislative primaries earlier this year, voters ejected eight of the 12 Republican incumbents on the ballot who had voted against education funding.

A similar dynamic is playing out in Kansas and Arizona, two red states where cuts to education spending have made Republicans unpopular. Arizona Governor Doug Ducey, who is seeking re-election, saw his popularity plummet when teachers went on strike in April and May for better pay. In Kansas, Republican gubernatorial nominee Kris Kobach is known nationally for his controversial views on immigration and voting rights, but his Democratic opponent spends most of her time focusing on Kobach’s support for his predecessor’s education cuts. “Kansas is in the toss-up column, and education is a big reason why,” says Jennifer Duffy, who analyzes gubernatorial races for the nonpartisan Cook Political Report. Because education is largely states’ purview, it is frequently a top issue in gubernatorial races, but Duffy says the intensity and the geography are different this year.

It’s not just governors’ races. The wave of wildcat teacher strikes (as those undertaken without union consent are known) began in West Virginia, where a chief instigator was Richard Ojeda, a first-term state senator and populist Democrat. Now running for Congress, he’s considered a contender in a district Donald Trump won by 50 points. Republicans are getting mileage out of the issue too: in a GOP primary in Kentucky, a high school math teacher came out of nowhere in May to defeat the state house majority leader, who had proposed a bill to cut teacher pensions. According to Education Week, 159 teachers have filed to run for state legislatures, 29 of them Republicans. Some 300 members of the American Federation of Teachers are running for office at some level–almost triple the number of the past two cycles, the union says.

To be sure, states like Oklahoma are still long shots for Democrats. But it’s the GOP that has the most to fear from voters motivated by education. The most politically energized demographic in the Trump era is college-educated suburban women–precisely the voters who tend to care the most about public education. In Oklahoma, Edmondson says he hears about the issue from parents at every campaign event. “They see this every day,” he says. “It is resonating with them, and they are ready for change.” 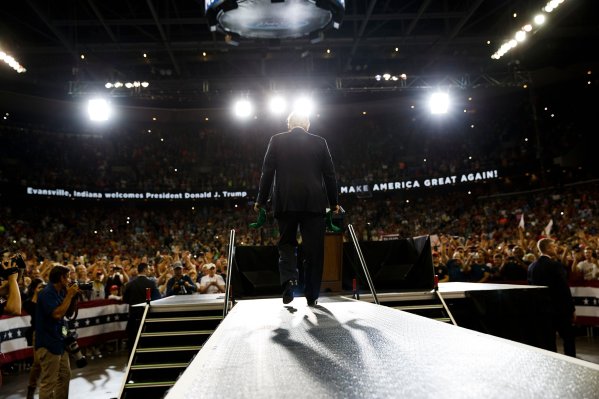 Why President Trump Is a Threat to GOP Senate Prospects
Next Up: Editor's Pick