Myanmar leader Aung San Suu Kyi acknowledged Thursday that her government could have better handled the violence against Rohingya Muslims in the country’s western Rakhine state. U.N. investigators have said the campaign by the Myanmar military was carried out with “genocidal intent.”

Since Aug. 2017, more than 700,000 Rohingya fled into neighboring Bangladesh amid what they described as a brutal campaign of gang rape, arson and mass killing. The ethnic cleansing operation has spawned one of the largest, ongoing humanitarian catastrophes, but the military has largely denied wrongdoing.

“There are of course ways in which, with hindsight, the situation could’ve been handled better,” Suu Kyi said at the World Economic Forum on ASEAN in the Vietnamese capital Hanoi, according to Reuters.

“But we believe that in order to have long-term security and stability we have to be fair to all sides. We can’t choose who should be protected by rule of law,” she said.

At the same event, she also addressed the plight of two imprisoned Reuters journalists who were sentenced to seven years in prison last week for violating an arcane state secrets law after they exposed a massacre of Rohingya men and boys.

“What I want to know is whether they feel there has been a miscarriage of justice,” Suu Kyi said of the widely pilloried trial that was riddled with irregularities.

Rights groups and international observers have seen the case as a bellwether for democracy and press freedom under Suu Kyi. However, on Thursday, she suggested this was a misreading.

“The judgement … had nothing to do with freedom of expression at all, it had to do with the Official Secrets Act,” she said. “I don’t think anybody has actually bothered to read it.”

She added that Wa Lone, 32, and Kyaw Soe Oo, 28, “were not jailed because they were journalists.”

“She fails to understand that real ‘rule of law’ means respect for evidence presented in court, actions brought based on clearly defined and proportionate laws, and independence of the judiciary from influence by the government or security forces,” he said in a statement. “On all these counts, the trial of the Reuters journalists failed the test.”

Last week, Vice President Mike Pence called for the journalists to be released.

They should “be commended—not imprisoned—for their work exposing human rights violations & mass killings,” he wrote on Twitter.

The court maintained that the two journalists had intended to damage Myanmar with documents that police witnesses admitting to planting on the pair just moments before their arrest. 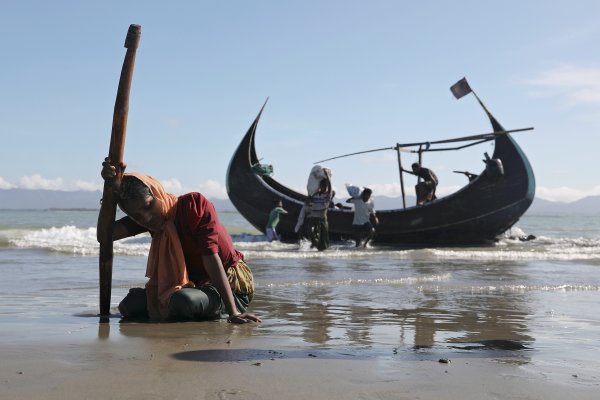 ICC Says it Can Rule on Alleged Crimes Against the Rohingya
Next Up: Editor's Pick