Palestinian men wait for a bus along the Israeli West Bank barrier on the outskirts of Jerusalem on September 12, 2013 in Aram, West Bank.
Uriel Sinai—Getty Images
Ideas
By Maen Hammad

Hammad is a Research, Campaigns, and Communication Assistant for Amnesty International, based in the Jerusalem Regional Office. Hammad was born in Jerusalem, lived most of his life in Detroit, Michigan, and is currently based in Ramallah, West Bank.

“Before Oslo it was never like this habibi [Arabic for ‘my love’]. I used to be able to leave work in Jerusalem, pick your older brother up from daycare in Ramallah and go to the beach for a picnic. There wasn’t a wall. There weren’t checkpoints. We could breathe.”

My mother who gave birth to me in the West Bank in 1992 uses this anecdote to remind me how things have changed for the worse since the signing of the Oslo I Accord. As usual, she is right.

Today marks the 25th anniversary of the Oslo I Accord, the first agreement between the Israeli government and the Palestinian Liberation Organization (PLO), famously signed on the lawn of the White House.

I am also 25, a Palestinian refugee and an American, a curious mix for this dispiriting anniversary. The Oslo I Accord, once a symbol of hope and of imminent justice, is today just a metric—a stretch of time to compare the unbearable present with the unbearable past “before Oslo.”

Palestinians have now marked more than 50 years of Israel’s occupation and over 11 years of the illegal blockade of the Gaza Strip. The number of Israeli settlers, whose presence in the Palestinian territories is illegal under international law, has tripled since the signing of the Oslo accords.

Freedom of movement for Palestinians is just a collection of words mentioned in passing—they have no real meaning here. Israeli forces are more “trigger happy” than before, and the unlawful maiming and killing of Palestinian civilians by Israeli snipers with hunting ammunition in Gaza is commonplace. Institutionalized discrimination has become so embedded into the way we live that I sometimes have to remind myself that crossing a military checkpoint on my morning commute is not normal.

I lived in the West Bank for two years before my family moved to Detroit, Michigan. Although I moved back last year, my life—privileged because of my upbringing and my naturalized U.S. citizenship—is far from the norm here. I grew up living essentially free of human rights violations, or as close to it as possible.

But my childhood summers often took place in the West Bank, and in some underlying way, those summers served as my own metric to chart the degradation of human rights here. It also made me understand what it means to be a Palestinian refugee in the diaspora: in the U.S., I am just a “millennial”; in the West Bank, I am a Palestinian of the “failed Oslo generation.”

When I was a child, I recall being able to walk from Qalandia refugee camp in the West Bank —the camp where my father was raised—to my aunt’s house in the nearby al-Ram neighborhood, a distance of no more than two kilometers, without passing any checkpoints.

Fast forward a few years, this same trip involved a checkpoint and an 25-foot-high concrete wall.

The first time I remember crossing a checkpoint, I was 12 years old. While in line waiting to pass the checkpoint, my aunt whispered to me and said, “Maen, speak English to the Israeli soldiers and tell them that you are American.” I responded, “But I am Palestinian, why would I lie?”

“It is easier this way habibi. Now go ahead of me. I will meet you at the other side,” she said, as if to coach me, knowing that the time spent at these checkpoints would outlast my short visit. Her training has turned out to be more useful than she could have known back then. Over a decade later, this same military checkpoint—my introduction to injustice—is the one I cross daily to reach our Amnesty International office in East Jerusalem.

I cross Qalandia checkpoint before I have my morning cup of coffee.

After being subjected to daily harassment from an Israeli soldier at the checkpoint, usually no more than 18 years old, I hop on the 273 bus to Jerusalem. As I look out the window, I pass the emblems of Oslo’s failures, including the growing number of illegal Israeli settlement blocs. Today, there are close to 600,000 Israeli settlers living in the West Bank and East Jerusalem.

When I get to work, I open my laptop and start reading into the new violations of freedom of movement and settlement expansion in East Jerusalem, as if I am immune or separate. As if Oslo never happened.

I recently spoke to my mother, who lives in the U.S., over Facetime to see if there was a glimpse of hope or a simple positive quote to end this piece with. She said, “Maen, unfortunately, there is an entire generation that knows nothing but failure and one that watched hope get hijacked. This is your generation. There is nothing optimistic to say, habibi.” Once again, my mother is right. 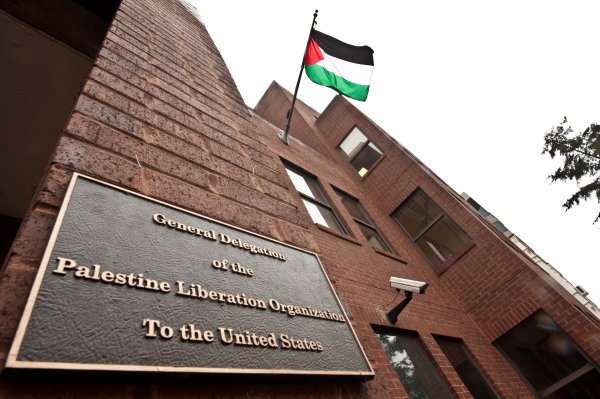 Why Trump's Closure of the Palestinian Mission Could Backfire
Next Up: Editor's Pick