Activists in Maine have raised more than $1 million dollars in a crowdfunded effort to get Sen. Susan Collins to oppose the confirmation of Supreme Court nominee Brett Kavanaugh.

The Maine’s People’s Alliance has banded together with the Mainers for Accountable Leadership and Ady Barkan, a dying father who has campaigned for healthcare reform, to ask Collins, a Republican senator from Maine, to vote no on Kavanaugh. If not, they will donate the money to Collins’s next Democratic challenger.

Collins, a crucial vote in in Kavanaugh’s upcoming Supreme Court confirmation (along with Alaska Sen. Lisa Murkowski), has drawn various efforts from activists in her state because she is seen as more pro-choice than many other Republican senators — and Kavanaugh’s nomination and confirmation process has brought the state of abortion rights in the U.S. into prominent focus.

Republicans currently hold a slim 51-49 majority in the Senate and only 51 votes are required to confirm Kavanaugh. Collins’ vote could decide whether he is appointed.

The Crowdpac.com campaign to convince Collins to vote against Kavanaugh has raised $1,115,713 with more than 40,000 pledges as of Wednesday morning. If Collins votes yes on Kavanaugh, organizers say the total amount raised will go toward whomever challenges the senator in the future. If Collins opposes Kavanaugh, none of the donors will be charged for the money they pledged.

Collins previously said she would oppose a Supreme Court nominee who would not uphold Roe v. Wade. But she also told reporters last week she thinks Kavanaugh will uphold the case because he told her it’s considered “settled law.” It’s unclear whether Kavanaugh actually believes that — a 2003 email unearthed during his confirmation hearings showed that he questioned whether the case is, in fact, settled law.

Collins called the fundraiser a bribery attempt and said it will not influence her vote either way in a statement to the conservative outlet Newsmax.

The organizations behind the campaign spoke out against Collins’ accusation of bribery.

“The idea of Susan Collins attacking an effort by 35,000 small donors as bribery is politics at its worst,” Marie Follayttar, co-director of Mainers for Accountable Leadership, said in a statement. “Thousands of Mainers are trying desperately to tell her that she needs to protect abortion access and critical healthcare coverage across the country by voting ‘no’ on Kavanaugh.”

Follayttar continued: “Sen. Collins owes it to her constituents to hear them out, and explain why Judge Kavanaugh’s demonstrated hostility to Roe v. Wade, opposition to covering pre-existing conditions and repeated lies is not disqualifying. If she doesn’t, we absolutely have the right to prepare to unseat her. Unlike Supreme Court judges, Senators do not enjoy a lifetime guarantee of their seat; they are accountable to the people.”

Collins is facing pressure from activists in other ways as well. About 3,000 coat hangers, symbolizing the back-alley abortions women were forced to have before Roe v. Wade legalized the procedure, have been sent to Collins’s office in Maine in the last few months. 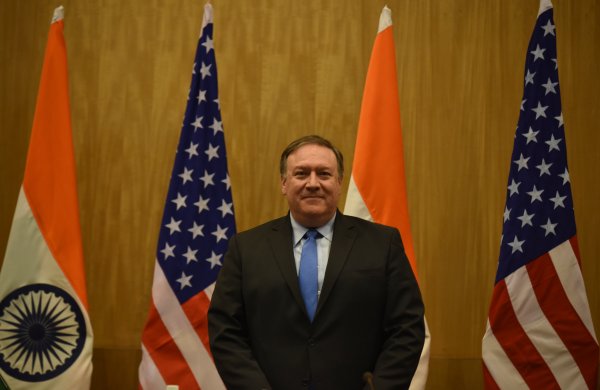 The State Department Tried to Rebrand As 'Department of Swagger' and Boy Did It Backfire
Next Up: Editor's Pick