Hurricane Florence Will Destroy Infrastructure and Could Knock Out Power for Weeks, FEMA Warns

The Federal Emergency Management Agency warned Tuesday that Hurricane Florence could knock out power for weeks in some coastal areas after it makes landfall.

The fast-moving Category 4 hurricane is gaining strength as it approaches the East Coast, according to the National Hurricane Center. The storm is forecast to make landfall on the coast of North or South Carolina Friday morning as a major hurricane, bringing storm surge and inland flooding, and causing power cuts in affected regions.

“The storm is going to definitely knock out power for days into weeks,” Jeffrey Byard, Associate Administrator for FEMA’s Office of Response and Recovery, told reporters Tuesday. “It’s going to destroy infrastructure, going to destroy homes.”

FEMA administrator Brock Long separately briefed President Donald Trump on the impending storm on Tuesday afternoon. Trump, who has declared a state of emergency in Virginia, North Carolina and South Carolina, said he expects Hurricane Florence to be one of the worst storms to ever hit the U.S. He said the federal government is ready to handle it.

Trump advised residents under evacuation orders to leave, saying, “It’s going to be really, really bad along the coast.”

Hurricane Florence will affect more than the coast — inland flooding is expected multiple states, including Virginia, West Virginia, Pennsylvania and Maryland, according to FEMA.

The agency urged people to heed evacuation warnings. More than 1.2 million people are under mandatory evacuation orders, including along most of the South Carolina coastline. Residents in multiple counties near North Carolina’s coast were also ordered to evacuate.

FEMA said it is assisting state-run emergency management services and that it has spread out 8 million bottles of water, 8 million meals, cots, blankets and generators across North Carolina, South Carolina and Virginia, where Hurricane Florence is expected to have the most impact. 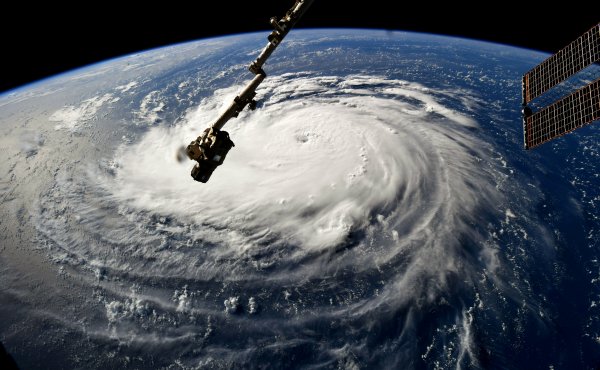 Here's What it Looks Like to Fly Directly Into the Eye of Hurricane Florence
Next Up: Editor's Pick