The NFL Fought Donald Trump's Bullying 30 Years Ago and Won. Should It Do It Again?

Back in the mid-1980s, people who worked with Donald Trump didn’t write anonymous op-eds for the New York Times to criticize his workplace habits. They sent letters right to the source.

“While others may be able to let your insensitive and denigrating comments pass, I no longer will,” wrote John Bassett, owner of the Tampa Bay Bandits — a United States Football League (USFL) team — in an August 16, 1984 letter to Trump. Bassett had begun his missive complimenting Trump, owner of the USFL’s New Jersey Generals, for his contributions to the fledgling league and stewardship of the Generals. Then he lights into the future 45th president of United States. “You are bigger, younger, and stronger than I, which means I’ll have no regrets whatsoever punching you right in the mouth the next time an instance occurs where you personally scorn me, or anyone else, who does not happen to salute and dance to your tune,” Bassett writes. “I really hope you don’t know you are doing it, but you are not only damaging yourself with your associates, but alienating them as well.”

Author Jeff Pearlman includes Bassett’s missive at the front of his engrossing, eerily relevant new book, Football For A Buck, which chronicles the life and death of the USFL, an upstart operation that offered pro football in the spring from 1983 through 1985. The USFL suspended operations after Trump led a charge to move the schedule to the fall and compete head-to-head with the mighty NFL.

According to Football For A Buck, Trump’s reportedly erratic and self-serving behavior in office, highlighted recently in Bob Woodward’s new book Fear and the Times op-ed from an unnamed senior administration official, was foreshadowed by his tenure in the USFL. He fudged facts, for example declaring that former NFL commissioner Pete Rozelle told him that he wished Trump had bought the NFL’s Baltimore Colts. Rozelle testified in court that he never said such a thing: in fact, according to Pearlman’s reporting, Rozelle told Trump in a meeting “Mr. Trump, as long as I or my heirs are involved in the NFL, you will never be a franchise owner in the league.”

The USFL got off to a promising start in 1983. Ratings were decent, enthusiasm was growing, and the league had a plan: don’t chase too much, too soon. But almost immediately after buying the Generals in 1984, no warning to USFL leaders, Trump started making waves about moving to the USFL schedule to the fall and taking on the NFL directly. Such a strategy didn’t make much sense. After its inaugural season, the USFL wasn’t a proven commodity. The NFL, not to mention the college and even high school games that captured the attention of millions of fans, would surely crush another pro league, many USFL owners and executives worried. Trump didn’t push the fall move because it was in the best interests of the USFL. Pearlman’s reporting shows that he wanted to force the NFL to take notice him, and welcome his team – or just him – into the league.

“Donald didn’t love the USFL,” Houston Gamblers owner Jerry Argovitz told Pearlman. The Gamblers, with their innovative, pass-happy “Run And Shoot” offense, launched the career of Jim Kelly, the Hall of Fame quarterback who eventually led the Buffalo Bills to four straight Super Bowl appearances. “We had a great league and a great idea,” said Argovitz. “But then everyone let Donald Trump take over. It was our death.” While many USFL players, like Kelly, quarterback Steve Young, linebacker Sam Mills and defensive end Reggie White, graduated to stellar NFL careers, the league’s demise cost hundreds of other players and team personnel their livelihoods.

A familiar Trump foe emerges in the book: the NFL. Trump convinced his fellow USFL owners to file an anti-trust suit against the league as it eyed a fall schedule. Today, Trump takes on the NFL on a regular basis, doing everything from calling some players sons of bitches, to needling the league on Twitter for not punshing players who kneel in protest of social injustices during the National Anthem, to calling out the league’s declining ratings. The league, and its owners, have largely refused to hit back at the President for his divisive rhetoric, fearing that many football fans agree with Trump’s opposition to kneeling during the anthem.

But maybe the NFL should learn from its experience three decades ago. Back then, the league took Trump on head-on. As Pearlman details in his book, the NFL’s game plan in the USFL anti-trust lawsuit was simple: make Trump the bad guy. No, the USFL wasn’t some poor little upstart being bullied by the big, bad NFL. Rather, the league was beholden to a swaggering real estate tycoon who wanted a seat at the NFL table.

Trump denied that a merger with the NFL was his motive. But the league produced for the jury multiple documents, signed or written by Trump, referencing a “merger” or “merger strategy.”

“He did not do the USFL well,” Patricia Sibilia, a juror at the 1986 USFL-NFL trial held in New York City, says in Football For A Buck. “What’s funny, in hindsight, is that his so-called business genius ruined it for them. He was not believable in anything he said. He came off as arrogant and unlikeable.” The USFL did “win” the anti-trust case, but was awarded just $1 in damages. Which was good for $3, since damages in anti-trust cases are tripled. The USFL, the upstart NFL competitor already on precarious financial footing, was done.

Back then, the NFL refused to cower to Trump. And it won. A book about a long-forgotten football league from the 1980s brings up an urgent question for today’s NFL: should the league blitz Trump again? 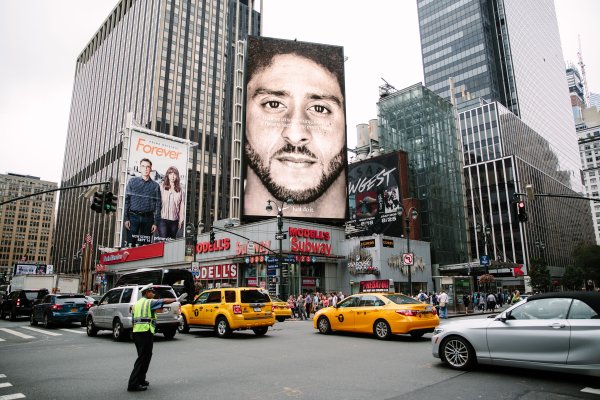