I Endured North Korea's 'Emotional Dictatorship' for 13 Years Before Escaping. Here's the Best Way to End It

Activist Yeonmi Park speaks onstage during The Tory Burch Foundation 2018 Embrace Ambition Summit at Alice Tully Hall on April 24, 2018 in New York City.
Slaven Vlasic—Getty Images for Tory Burch Foundation
Ideas
By Yeonmi Park
Park is a North Korean refugee and an expert on the country’s black market economy. Park and her family escaped North Korea through China and Mongolia in 2007. She is currently a media fellow at Freedom Factory, a think tank based in Seoul, and studies criminal justice at Dongguk University.

There just weren’t enough potatoes. My family was starving and the only way to survive was to escape. So—like thousands of others—my mother and I crossed the frozen river to China in the middle of the night. I was 13 years old. When I left North Korea, I didn’t even know what it meant to be free. All I wanted was a bowl of rice.

I knew that China had lights. I thought, “If I go where the light is, there will be some food.” But the Chinese government didn’t recognize us as refugees. They were actively trying to catch us and send us back to North Korea; there were Chinese people ready to take advantage of our vulnerability. That’s how human trafficking happens.

My mother and I both became victims. For almost two years, we were held captive in China by different human trafficking brokers who smuggled us across the border. We lived in constant fear of being raped or arrested and sent back. One day, someone told me that we could be free in South Korea. We just had to get there. So I crossed the Gobi Desert to Mongolia with my mother and several other North Korean defectors. I accepted that I might die during this journey because there was no way to go back to North Korea and survive.

When we got to Mongolia, the soldiers caught us. They told us, “You are going back to China and then you’ll be sent back to North Korea.” That’s why we did not hesitate to tell them we were going to kill ourselves. We knew what the consequences were—the regime would have us executed or we would starve to death. So we threatened to end our lives. We were lucky and they didn’t send us back. Instead, we were sent to South Korea.

I stepped off the airplane onto a different planet. In South Korea, everything was new and scary. I had to start my education all over again, as a teenager. One of the hardest things for me was learning how to introduce myself. I had never done this before. My teacher explained that the first thing you say is your name, age, your hometown. Then you can talk about your favorite hobbies and what you want to be in the future. I had no idea what a hobby was and I had never once thought about what I wanted to be when I grew up. There is no “I” in North Korea, only “we.” I couldn’t even name my favorite color. I didn’t know the right answer. So I copied my teacher, who said her favorite color was pink. It took me a long time to start thinking for myself.

Because I was born in North Korea, I had never traveled anywhere and I didn’t have access to the internet or outside information. Before I escaped, I had no idea that North Korea was one of the poorest countries on the planet. I didn’t know that people living in other countries weren’t tortured and starving. I just thought it was normal. Growing up, we were taught that people from South Korea and the U.S. were evil imperialists. In my school books, all Americans looked like monsters. For me, that was my only image of foreigners until I got to South Korea. That’s when I realized the power of brainwashing in North Korea. Everything—the songs you sing, the books you read, the math problems you learn—everything is brainwashing. It is emotional dictatorship and it is how the Kim family has held onto power for so long.

And it works. I grew up believing that North Korea was the strongest country in the world and that the Kims, who I was taught to worship, would protect and save me. But Kim Jong Un is one of the most brutal dictators ever and his regime has the worst human rights record on earth. He starves, abuses, and brainwashes millions of people. His government controls people through deprivation, deception, and a strict censorship of all outside information, including foreign news, TV shows, and books. People caught consuming forbidden media are severely punished or killed. But North Koreans are thirsty for knowledge and they are risking torture and death just to access content people who live in the free world take for granted.

Today, I am a member of the board of the Human Rights Foundation and I raise awareness of the plight of the millions of people still living in North Korea. They are just like me—they exist and they are suffering and they are waiting for us to help them out. I meet so many people who escaped from North Korea who tell me that they decided to risk their lives for freedom after watching content smuggled into the country.

We have to help the people of North Korea win the information war by giving them access to the outside world. Since 2016, the Human Rights Foundation’s Flash Drives for Freedom campaign has worked to disrupt Kim Jong Un’s propaganda machine by collecting USB drives, loading them up with pop culture, news, and video content, and getting them into the hands of the North Korean people. More than 70,000 USB sticks have been sent into North Korea, packed with outside information that can transform the country and empower its people to demand freedom.

I used to think that power was only for strong, wealthy people. I never thought that power could be used to protect the weak and the voiceless. Growing up in North Korea, there was no word for justice. There was no word for liberty, human rights, or even love. Because if you don’t have the words to describe something, you can’t understand the concept. That is why the North Korean regime also controls words. Once I escaped, I realized that without these things, we cannot fulfill our potential. We cannot be who we are as human beings.

Today, I have liberty and love. I live in the United States with my husband and our new baby. I have a life I couldn’t have imagined during the most painful and difficult parts of my journey. I never thought that I would be completely free or that I would have the chance to fight for justice and give hope to people who have none—the kind of person I used to be. And every day I am grateful that I no longer have to live in fear of starving to death.

I know now that my favorite color is spring green and my hobbies are reading books and watching documentaries. And what I want to be in the future is someone who continues to give strength to those who are weak and who speaks up for those without a voice. I don’t have to copy other people’s answers anymore. Now, I think for myself. One day, I hope millions of North Koreans can do the same.

Park is a speaker at the Oslo Freedom Forum in New York on September 17, 2018. 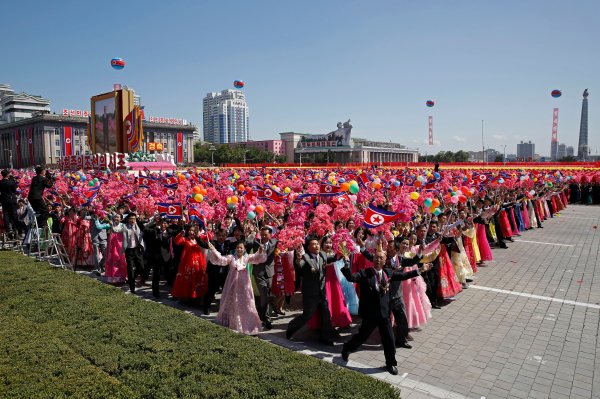