The two higher-end iPhone models, named the iPhone XS and iPhone XS Max, feature more advanced screens using what’s called OLED technology. They will be available in gold, silver and space gray finishes. The iPhone XS has a 5.8-inch display, while the iPhone XS Max has a 6.5-inch display. The iPhone XS runs on Apple’s new A12 Bionic processor, helping apps launch faster and providing other under-the-hood benefits. Both models have two rear-facing 12-megapixel cameras, one wide-angle and the other telephoto.

The new iPhone XS models will be available with up to 512GB of storage, the most ever in an iPhone.

A new photography feature will let iPhone XS uses take a photograph, then later select the amount of background blur, or “bokeh,” they want in the image.

The more affordable model, the iPhone XR, has an LCD display, which are often less impressive than OLED screens. Still, the iPhone XR’s screen, which Apple calls “Liquid Retina,” is also an edge-to-edge design. Instead of 3D Touch, the iPhone XR has “haptic touch,” which offers a similar feature-set without fingerprint scanning, which is replaced with FaceID as a means of unlocking the device. The iPhone XR has a single rear-facing 12-megapixel camera. It has 90 minutes more battery life than the iPhone 8, Schiller said.

Interestingly, the cheaper iPhone XR has the A12 Bionic chip, the same processor as the more expensive iPhone XS models.

All three phones are based on the design of last year’s iPhone X, Apple’s first smartphone with an edge-to-edge screen and other design improvements.

By introducing pricey iPhone XS models alongside a cheaper entry-level model, Apple may risk cannibalizing the sales of its more expensive, and therefore likely more profitable device. But the Cupertino, Calif. tech giant could also be wagering that the higher-end iPhone XS could be seen as a status symbol, and thus attract more affluent buyers. 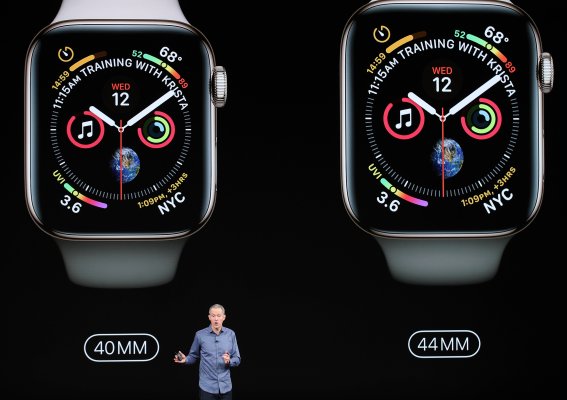 Apple's New Health-Focused Apple Watch Can Call for Help if You Fall Down
Next Up: Editor's Pick