The Venezuelan President Nicolás Maduro (C) speaks next electoral candidates after the first results of the controversial election for a constituent assembly on the Bolivar square in Caracas, Venezuela, 31 July 2017.
picture alliance via Getty Images
By Ciara Nugent

Venezuela’s embattled dictator Nicolas Maduro denounced “an international, global defamation campaign” against his government on Monday, in the wake of revelations that Venezuelan military officials had met several times with Trump Administration officials to discuss a coup. The alleged meetings, reported by the New York Times on September 8, followed years of escalating U.S. sanctions on Venezuela, designed to put pressure on the country’s repressive leaders who have overseen an economic and humanitarian crisis. Here’s what to know about the alleged plot to overthrow the Venezuelan government.

When did the meetings between Venezuelan officers and the Trump Administration take place?

The Times reported that the meetings took place from the fall of 2017 onwards, stretching into 2018. Rebellious members of the Venezuelan military initially reached out to the U.S. government in late summer, asking to discuss removing Maduro.

What prompted the meetings?

In August 2017, Maduro had installed a “constituent assembly,” a 545-strong body of legislators loyal to the president tasked with rewriting Venezuela’s constitution. A week later, President Donald Trump said he had not ruled out a “military option” for dealing with the country, after years of economic sanctions had failed to make the Venezuelan leadership restore democracy.

“The Venezuelan military are increasingly aware of the unprecedented scale of their country’s humanitarian crisis,” says Diego Moya Ocampos, a political risk analyst at IHT Markit. “While Maduro still has the support of the high military command,” Moya Ocampos tells TIME, “an escalating crackdown on dissent in the last six months, means he no longer has the full support of all the factions of the armed forces. That has generated a new dynamic.”

Why is Venezuela experiencing a humanitarian crisis?

Venezuela’s crisis began soon after Maduro took over the Venezuelan presidency in 2013 following the death of Hugo Chavez, the architect of Venezuela’s socialist revolution. Chavez nationalized huge sections of the country’s economy and used a boom in oil prices to fund vast welfare programs and government subsidies. But in 2014, the global oil price plummeted from $100 a barrel to around $26. They have since recovered to $50—but for Venezuela’s rigid, oil-dependent economy, it was too late.

Money flooded out of the country and inflation began to spiral out of control; it is set to hit 1 million percent by the end of 2018. The local currency, the bolivar, has become essentially worthless, leaving the government unable to pay for crucial imports and Venezuelans unable to afford basic supplies like toilet roll, food and medicine. At least 1.5 million people have fled to other Latin American countries and elsewhere since 2014.

How has the Venezuelan government responded to its crisis?

Venezuela’s government has responded to its economic woes with increasing authoritarianism, imprisoning political opponents and brutally repressing civilian protests over economic issues. In May, Maduro’s government declared victory in national elections that had been boycotted by the opposition. The international community has refused to recognize its re-election, with 14 Latin American and Caribbean countries, and Canada, withdrawing their ambassadors from Venezuela after the vote.

Did the Trump administration agree to help overthrow the Venezuelan government?

No. The Times says the American officials had gone to the meetings “on listening mode” and eventually decided against helping the officials.

The White House has neither confirmed nor denied the report, which was based on interviews with 11 current and former American officials and one former Venezuelan military commander.

How did the Venezuelan government respond to the meetings?

With outrage. On Twitter, Venezuela’s foreign minister Jorge Arreaza called the report “crass evidence” of plans for American intervention. “It’s absolutely unacceptable and unjustifiable that officials from Donald Trump’s government take part in meetings to encourage violent actions by extremist sectors with the aim of attacking Venezuelan democracy,” he wrote.

Maduro told reporters on Monday that claims of a humanitarian crisis were “defamation” used to “justify an unconstitutional event, a coup.”

Many in both Latin American and U.S. media say the report plays well for Maduro, who has long blamed his country’s troubles on a U.S.-led international conspiracy reminiscent of the Cold War. In the 1960s and 1970s, fearing the spread of communism to its southern neighbors, the U.S. helped to overthrow left-wing governments across Latin America. Washington often helped instal violent right-wing dictatorships in their place.

Is there likely to be a coup in Venezuela now?

While some parts of the military have lost faith in Maduro’s regime, “the vast majority are still upholding the status quo,” says Moya Ocampos. He adds that the military’s powerful counterintelligence forces have been using torture and arbitrary detention to stamp out dissent among officers.

The military are unlikely to act “unless civilian protests reach a scale that can’t be contained or there is a credible threat of the use of force from outside Venezuela,” says Moya Ocampos. “That could generate a response.” 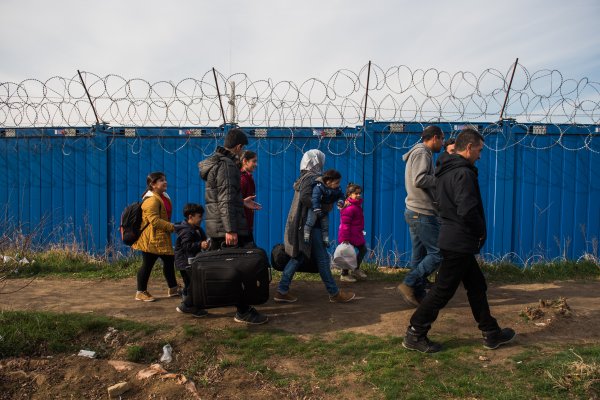 Why the E.U. Is Planning a 10,000-Strong Armed Border Force
Next Up: Editor's Pick