Following Les Moonves’ resignation as CEO of CBS on Sunday, Stephen Colbert once again took aim at his former boss for the allegations of sexual misconduct leveled against him.

Colbert originally addressed the claims made by six women in an August New Yorker report with a somber monologue in which he spoke about about the importance of accountability.

However, after six additional women came forward to accuse Moonves of harassment or assault in another New Yorker report, Colbert took a different tack. “The article is extremely disturbing, and I’m not surprised that that’s it. Les Moonves is gone,” the Late Show host said, before adding a Louis C.K.-inspired jab. “For at least nine months, until he does a set at the Comedy Cellar.”

Moonves has continued to deny the allegations against him. “Untrue allegations from decades ago are now being made against me that are not consistent with who I am,” he said in a statement issued on Sunday.

Meanwhile, Julie Chen, his wife of nearly 14 years, was absent from Monday’s season 9 premiere of her show, The Talk. “I am taking a few days off from The Talk to be with my family,” she said in a statement ahead of the broadcast. “I will be back soon and will see you Thursday night on Big Brother.” 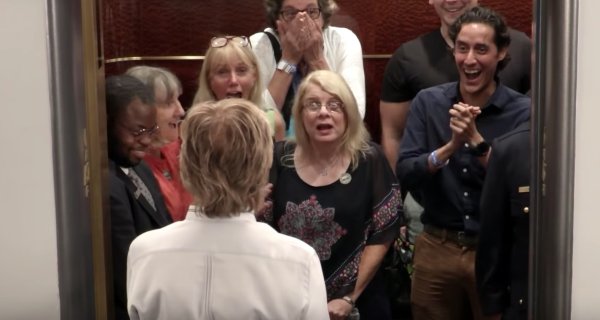 Paul McCartney Pranking Fans in Elevators Is Just a Delight
Next Up: Editor's Pick