The E.U. Is Planning a 10,000-Strong Armed Force to Protect Its Borders. Here’s What to Know

The European Union will deploy 10,000 armed border guards to tackle unlawful migration by 2020, the European Commission President Jean-Claude Juncker announced in a speech on Wednesday.

The force will have the power to use armed force on the E.U.’s external borders, according to a draft of the document reported Monday by the Financial Times.

Migration has been a particularly divisive issue within the E.U. since a major influx of refugees in 2015. Voters’ fears and concerns over migration have, in part, led to right wing parties surging in popularity and being elected to government in a number of member states including Italy and Austria.

The border force proposal marks a significant E.U.-level policy move in a debate that has long been defined by disagreements between individual member states. Most recently, in July, the new anti-immigrant Italian government refused to allow boats carrying hundreds of migrants to dock in its ports, leading to a political deadlock that only defused when Spain agreed to take the migrants in.

The proposal for a heavily beefed-up E.U. border force is also likely to be highly controversial—with rights groups who decry the construction of a “Fortress Europe,” and with political parties who resent centralized European institutions accruing more power.

Here’s what to know about the plans.

The proposal is actually to significantly strengthen an existing force, rather than to create a totally new one. The body, Frontex, currently employs just 1,500 border guards and works alongside national border control agencies.

According to the Financial Times, under the new proposal the force will not only gain members but also increased powers. The document suggests it will be deployed on the E.U.’s external borders and also have powers to prevent “secondary movements” between E.U. nations, as well as “step up the effective return of irregular migrants” to countries outside of the bloc. These are powers long demanded by anti-migrant voices in the E.U.

It is unclear whether the plans mean borders between member states will also be policed. If they are, it would mark a seismic change to one of the E.U.’s founding principles of free movement.

Juncker’s plan is for the border force to be in place by 2020, but to progress further it would need support from member states and possibly the European parliament too.

Is this the “moment of truth” for free movement in Europe?

The Financial Times, breaking the news of Juncker’s plan before the annoucement, quoted one E.U. diplomat saying that it would be the “moment of truth” for the Schengen area, a zone covering 26 states in mainland Europe where cross-border travel is allowed without passport checks.

The Schengen area is beloved by Europeans of most political leanings, but it has come under pressure for its role in allowing migrants to move from one country to another. Juncker’s proposal is an attempt to safeguard free movement by bolstering oversight of who is allowed to enter Europe in the first place. “A Europe without internal borders can only exist if it has functioning external borders,” Austria’s right-wing Chancellor Sebastian Kurz told the New York Times in July.

Under current E.U. law, asylum-seekers must register in the first E.U. country they land in, but the free-movement Schengen area means that traveling between countries is easy and unregulated. This typically allows migrants to move from point-of-entry countries like Greece to countries with higher living standards, like Germany.

However European borders, internal and external, are under much less pressure than they were at the height of the migration crisis. The number of arrivals to the E.U. fell from a height of over 1 million in 2015 to just 186,000 in 2017, according to the International Organization for Migration.

The numbers of migrants moving between E.U. member states are also way down from the highs of 2015 and 2016. “It’s true the Schengen area is under pressure,” says Marie De Somer, a senior policy analyst on migration and diversity at the European Policy Centre, a Brussels think tank. “But it’s more political pressure, rather than actual pressure from uncontrolled movements.”

Why is the border force being announced now?

The announcement was made in Juncker’s annual state of the union address on Wednesday, which takes a similar format to the annual speech made by the U.S. President—discussing the successes of the past year’s policies and looking ahead to the future.

“I don’t think Juncker can really paint a positive picture about the accomplishments of the E.U. on migration in the past year,” says De Somer. “Everyone knows that we’re in a deep political crisis, so I don’t think he can go for a message in which things might be a little problematic but the future looks bright.”

Is a border force likely to be effective?

The E.U.’s previous attempts to tackle the migration crisis suggest how difficult it is to reach bloc-wide cooperation on such a politically sensitive issue. Not a single state has volunteered to host migrant-processing facilities, a core measured agreed by E.U. leaders in June. Those plans involved building “controlled centres” to process migrants inside member states and “disembarkation platforms” in non-member states where rescued migrants could be taken.

Rights groups have warned against creating a “Fortress Europe” buttressed by exclusionary borders, external processing camps, and border guards able to use force.

“Barbed-wire fences and remote camps might make voters feel safe today but they won’t address the actual forces that drive migration or resolve the situation of people on the move, even as they empower forces in Europe who want to take the continent back to the hyper-nationalism of its bloody past,” writes Benjamin Ward, the deputy director of Human Rights Watch’s European division.

But, says Matthew Goodwin, the author of National Populism: The Revolt Against Liberal Democracy, the E.U. is under pressure to reassure its citizens first and foremost. “The big challenge facing the European Union is how to give citizens a stronger feeling of both physical and cultural security,” he tells TIME. “We know from E.U.-wide surveys that public concerns about immigration and terrorism have increased dramatically, and that these worries about identity and security are now also bleeding into how people think about the E.U. more generally. This is the big risk for the E.U.—that by failing to bolster people’s sense of security it will further erode support for the E.U. project more generally.”

But De Somer warns that the border force plan “could also backfire, because it’s reinforcing the idea that there’s a lack of control, which is what you hear mostly at the extreme right wing of the political spectrum.”

“In the long term,” she says, “it reinforces exactly, perhaps, what they’re trying to counter.” 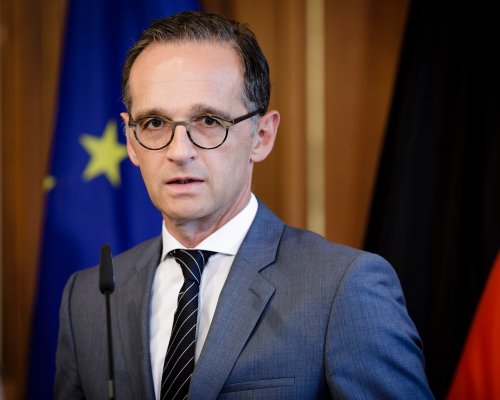 Germany's Foreign Minister: When the U.S. 'Crosses the Line,' Europe Must Act
Next Up: Editor's Pick