Oklahoma zookeeper and a one-time presidential candidate who calls himself Joe Exotic allegedly tried to have a woman running a big cat sanctuary killed.

On Friday, Joe Exotic, also known as Joseph Maldonado-Passage, Joseph Allen Maldonado and Joseph Allen Schreibvogel was indicted on two counts of hiring a person to commit murder, the U.S. Department of Justice said in a press release.

For the first count, according to the statement, the federal grand jury is accusing Maldonado-Passage, 55, of “hiring an unnamed person in November 2017 to murder ‘Jane Doe’ in Florida.”

Maldonado-Passage allegedly paid the unnamed person $3,000 to travel from Oklahoma to South Carolina and finally Florida to carry out the crime.

The grand jury also alleges that Maldonado-Passage even agreed to pay the hitman more money once the murder was complete. It is unclear at this time as to what happened after the hitman arrived in Florida, but the U.S. Department of Justice explained, “Jane Doe did not suffer any physical harm.”

For the second count, in July 2016, Maldonado-Passage “repeatedly asked a different unnamed person to find someone to murder Jane Doe in exchange for money.” However, instead of participating in the murder-for-hire plot, the person allegedly connected Maldonado-Passage with an undercover FBI agent.

Maldonado-Passage, who previously owned G.W. Exotic Animal Memorial Park, then met up with the undercover agent in December of last year to discuss the plan, authorities allege.

The zookeeper was arrested Friday in Gulf Breeze, Florida. Also on Friday, Maldonado-Passage appeared before a U.S. Magistrate Judge in the Pensacola Division of the Northern District of Florida.

While Jane Doe’s identity has not been confirmed, Big Cat Rescue CEO Carole Baskin claims she was the murder target.

“It is important to understand that this is not the isolated act of one crazy bad apple,” Baskin wrote on Big Cat Rescue’s website. Big Cat Rescue is a sanctuary dedicated to caring for abandoned and abused cats and Baskin has been critical of Joe for many years.

“A significant part of our mission has been to stop mistreatment and exploitation of big cats at roadside zoos, particularly those who rip tiger cubs from their mothers at birth to charge the public to pet and take photos with them.”

“Because Big Cat Rescue has been a leader in working to stop what we view as abuse of big cats and been very effective in our work, I have received multiple death threats over the years, including at one point a number of snakes placed in my mailbox,” Baskin continued.

“Schreibvogel ran, in our view, one of the most notorious cub petting roadside zoos in the country in Wynnewood, OK. Years ago he also operated a traveling exhibit that would bring cubs to malls throughout the Midwest and Southwest.”

“In 2011 Big Cat Rescue sued for violations of its intellectual property rights and in 2013 was granted a consent judgement for over $1 million. Litigation to collect on the judgement has been ongoing since then in Oklahoma,” Baskin continued.

Baskin concluded by thanking the FBI and the US Attorney’s Office for the Western District of Oklahoma and the U.S. Marshall’s Service “for the many months of incredibly hard work that went into this investigation and arrest.”

If found guilty of murder-for-hire, Maldonado-Passage “could be imprisoned on each count up to ten years. He would also be subject to three years of supervised release and a fine of up to $250,000 per count,” U.S. Department of Justice revealed in the statement.

Before his arrest, Maldonado-Passage first gained the public’s attention when he decided to run for president in 2016.

“I’m gay. I’ve had two boyfriends most of my life. I currently got legally married— thank you God it’s finally legal in America,” Maldonado-Passage said in a campaign video. “I’ve had some kinky sex. I’ve tried drugs through the younger years of my life. I’m broke as s—.”

In addition to his views, Maldonado-Passage mentioned his work with animals and how he’s “built one of the biggest facilities, and the nicest facilities, for exotic animals in this country, as far as a private individual goes.”

The outspoken zookeeper also added, “I have a judgement against me from some bitch down in Florida.” It was not clear if he was referring to Baskin. 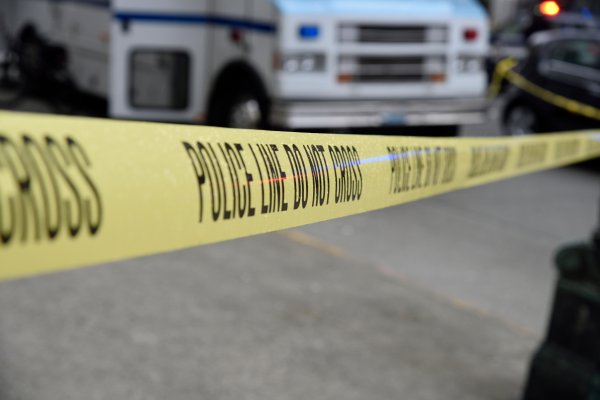 Wife Fatally Shoots Man Outside Walmart in Front of 3 Kids
Next Up: Editor's Pick