The day after Nike announced Colin Kaepernick as the face of its new ad campaign, a Louisiana mayor reportedly banned the company’s products from booster clubs and recreation facilities.

Ben Zahn, the mayor of Kenner, Louisiana, ordered the moratorium on buying or wearing Nike products in a leaked memorandum that was dated Sept. 5.

“Under no circumstances will any Nike product or any product with the Nike logo be purchased for use or delivery at any City of Kenner Recreation Facility,” the memo read, according to CNN.

The memo, which stated that it was effective immediately, said that all athletic gear and equipment purchased by the booster clubs must be approved by the Parks and Recreation Department.

Intended as an internal directive, the leaked memo quickly spread on social media.

In a statement on Monday, Zahn said he was trying to protect taxpayers from funding a “political campaign.”

“My decision disallowing Nike from profiting from our taxpayers while they are using their powerful voice as a political tool is my message. This government will not let taxpayer dollars be used to promote a company’s or individual’s political position, platform or principle,” he said.

He added that people would be allowed to wear their own Nike apparel to city parks and playgrounds.

The Kenner city ban is the latest backlash against Nike’s decision to feature the former San Francisco 49ers quarterback in its anniversary “Just Do It” campaign. The Kaepernick endorsement prompted some to call for a #NikeBoycott, with people posting videos of themselves burning and destroying Nike gear.

Kaepernick sparked a wave of NFL national anthem protests against racial inequality and political brutality. His decision to kneel and his new involvement with Nike has drawn criticism, including from President Donald Trump. But the endorsement deal has also been a windfall for Nike, which reportedly saw a 31% increase in online sales after the ad was released. 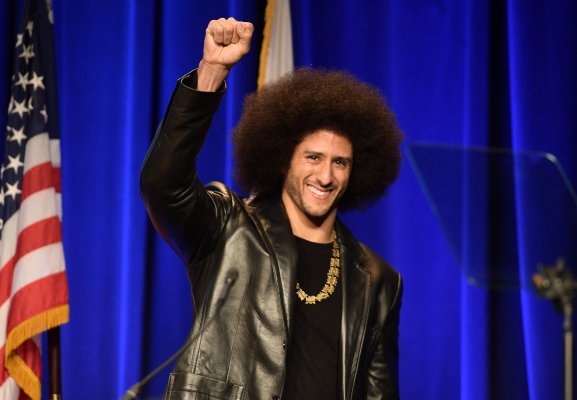