In a 30-second video that went viral in Saudi Arabia, a hotel worker invites his viewers to “join us” in breakfast as he shares a meal with a veiled female colleague. The short clip quickly earned the man opprobrium for violating the deeply conservative traditions of the Gulf kingdom, and he was arrested on Sunday.

The man, who has been identified only as an Egyptian national, was summoned for failing to adhere to government regulations that stipulate a gender-segregated workplace, according to the Guardian.

“The labour ministry arrested an expatriate in Jeddah after he appeared in an offensive video,” the ministry said.

The footage shows the pair eating at a desk, and waving at the camera. Toward the end of the clip, the woman, who is dressed in an all-black niqab and abaya, appears to feed the man.

Saudi Arabia prohibits men and women who are not related from socializing. For most activities, women are required to be accompanied by a male guardian, typically a close male relative. In workplaces, as well as restaurants, women and men are usually separated.

After the widely shared video sparked backlash from conservative critics, the Public Prosecution urged expats in the Muslim kingdom to respect the “values and traditions of Saudi society,” the Guardian reports.

The hotel worker’s arrest comes amid the kingdom’s uneven efforts to jumpstart a host of social and economic reforms, many targeting women’s role in Saudi society. What Crown Prince Mohammed bin Salman self-styles a bid to modernize the kingdom has however, been dubbed by some observers a superficial attempt curry favor with the West.

Critics of the effort point to the much-lauded end of the ban on women driving this past summer, which came at the same time as the jailing of female activists who had campaigned to end the prohibition.

While the first mixed-gender concerts have been permitted, there have also been efforts to increase regulations on women’s clothing and activities. In April, Saudi sports authorities closed a female gym in Riyadh after a promotional video featured woman in workout clothes. 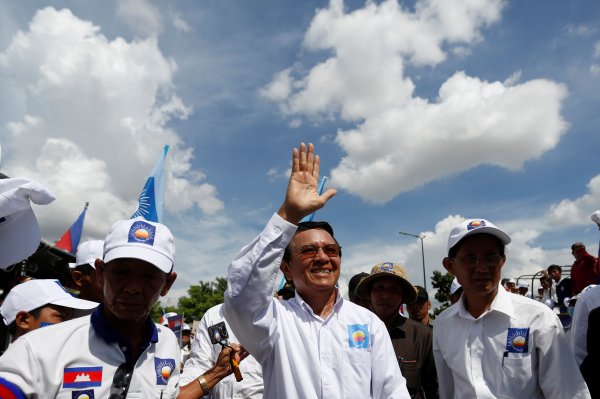 Cambodian Opposition Leader Freed After a Year in Jail
Next Up: Editor's Pick