Naomi Osaka Explains What She Was Feeling During That Emotional U.S. Open Trophy Ceremony

Rising tennis star Naomi Osaka just won her first Grand Slam title at the 2018 U.S. Open, but her win was not without controversy surrounding the penalties meted out to Serena Williams by the match’s umpire.

In the wake of the highly anticipated final, where Williams was docked a point and then an entire game before Osaka beat her to take the title, both Williams and Osaka ended up in tears. Now, Osaka has weighed in on some of the emotions she was feeling at the trophy ceremony where she apologized to the crowd.

In her first talk show appearance since the Open, Osaka told the Today show on Monday morning, that she apologized to the tennis fans, because she felt it wasn’t the ending that fans wanted. “I just felt like everyone was sort of unhappy out there and I knew it wasn’t the ending that everyone wanted it to be. In my dreams I won in a very tough, competitive match, so I just felt very emotional and that I had to apologize,” she said.

It turns out that during the match, Osaka wasn’t sure what was happening when Williams and the match umpire Carlos Ramos were engaged in an argument. When the crowd booed, she explained her feelings at the time.

She told Today: “I felt a little bit sad because I wasn’t really sure if they were booing at me or if it wasn’t the outcome that they wanted.” She added that the win was bittersweet for her, too, because she has “been a fan of Serena” her entire life and “knew how badly the crowd wanted her to win, so I was just emotional out there.”

As tennis stars and fans decried the umpire’s call on Williams, Osaka is still trying to process the finale. “I’ve been going all over the place, so I can’t really form an opinion right now,” she said. “But for sure I want to watch everything and I want to know what happened, because this is one of the biggest things that happened to me.” 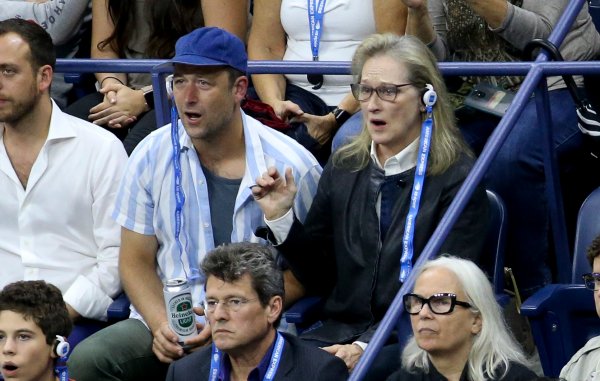 Meryl Streep Reacting to This Intense U.S. Open Game Is the Stuff of Great Drama
Next Up: Editor's Pick