A 93-foot concrete and steel high-rise monument was unveiled Sunday at the Pennsylvania crash site of Flight 93, to honor the heroic passengers who thwarted the hijacked plane from reaching its target on 9/11.

The Tower of Voices contains aluminum wind chimes for each of the plane’s 40 passengers — each with its own distinct sound — and is the final component of the Flight 93 National Memorial at the crash site, two miles north of Shanksville in Somerset County.

The 2,200-acre memorial also includes a visitor’s center that opened three years ago and a plaza that opened in 2011.

“Together their voices will ring out into perpetuity, with this beautiful Somerset County, Pennsylvania, wind,” said park Superintendent Stephen Clark, USA Today reports.

Flight 93 was one of the four planes hijacked on Sept. 11, 2001 in the coordinated terrorist attack on the U.S. that killed nearly 3,000 people. Tuesday will mark the 17th anniversary of the attacks.

On the morning of 9/11, the California-bound plane was seized by four hijackers who announced the aircraft would be returning to its New Jersey departure point.

As passengers hurriedly made emotional phone calls to friends and families, some were informed about the other suicide-missions that had taken place that day. The passengers decided to take matters into their own hands.

“When they learned that, it galvanized them as a group,” Clark said. “They said, ‘We’re not going back to any airport. This is a suicide mission.’”

The passengers stormed the cockpit in an attempt to divert the plane from the the original target, which officials believed to be the nation’s capital, but a brawl ensued that led the plane to crash in a field. Flight 93 was the only plane that did not hit the hijackers’ target.

According to the architect, preserving the voices of the victims was essential in the conception of the tower.

“We wanted to do, I’ll call it a living memorial in sound, because the last memory of many of the people on the plane were through their voices on phone calls,” said Paul Murdoch, USA Today reports. “And we wanted to use the natural forces of the site to activate the chimes.”

President Trump is expected to attend a memorial ceremony Tuesday in Shanksville. 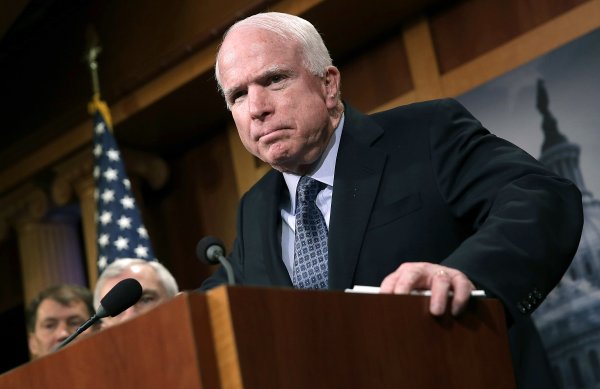 Putin Critic Bill Browder on Why John McCain Became His Hero
Next Up: Editor's Pick