(Bloomberg) — Kim Jong Un presided over a tempered military parade Sunday, in the latest sign that he wants to revive stalled nuclear talks with the U.S. as he pushes for North Korea to rejoin the international community.

Kim marked the 70th anniversary of his grandfather’s regime without showing off provocative hardware such as long-range ballistic missiles that would likely have irked President Donald Trump, who said in June that North Korea is “ no longer a nuclear threat.”

Trump praised Kim for the parade’s focus on growth and the reported lack of nuclear weapons, calling it a “big and very positive statement from North Korea” and taking credit for his efforts.

“Thank you To Chairman Kim,” Trump said in a tweet. “We will both prove everyone wrong! There is nothing like good dialogue from two people that like each other! Much better than before I took office.”

In the past, North Korea has used such pageants to show off its most advanced weapons including intercontinental ballistic missiles capable of striking the U.S.

But on Sunday, nearly half of the military parade was devoted to showcasing civilian efforts to build the country’s economy, the Associated Press reported. Foreign journalists in the North Korean capital posted Twitter photos showing parade floats with large slogans pushing economic development.

The slogans — one of which said “all efforts on economy” — are in line with Kim’s new political priority outlined earlier this year before he met Trump. In April, Kim said economic development would be the country’s focus as he visited farms, construction sites and various factories prodding industrial growth.

Kim is emphasizing peace and the economy as a way to “create the momentum in the U.S.-North Korea relations and to declare the (Korean) war is over,” said Lee Ho-ryung, chief of North Korean studies at the Korea Institute for Defense Analyses.

The parade came at a delicate time, as Kim presses for a peace declaration to formally end the war North Korea and China fought against U.S.-led forces from 1950-53. Kim got to the bargaining table in part by vowing not to resume nuclear tests, and he could use peace talks to legitimize his regime and get international sanctions relaxed.

The U.S.’s newly appointed special representative for North Korea, former Ford Motor Co. executive Steve Biegun, was due to arrive in the region Monday. And South Korean President Moon Jae-in was slated to travel to Pyongyang on Sept. 18 for the first such trip in 11 years.

The parties are struggling to implement a 1-1/2 page document signed by Trump and Kim in June at the first-ever summit between sitting U.S. and North Korean leaders. The two leaders pledged to “work toward complete denuclearization of the Korean Peninsula” without setting a timetable or explaining what that means.

Analysts closely watched for pronouncements by Kim that could suggest a new challenge to the U.S. or a willingness to compromise. But several media reports from Pyongyang said Kim attended the parade but did not address the assembled crowd.

North Korea’s state-run media published Friday what it said was an “indictment” by its South Korean wing, denouncing U.S. forces on the peninsula and calling their withdrawal “the irresistible trend of the times.” The statement contrasted with Kim’s remarks to visiting South Korean envoys Wednesday, when he said that declaring peace wouldn’t require American troops to leave.

In April 2017, as tensions with Trump were escalating, Kim paraded a series of missile canisters through Kim Il Sung Square that foreshadowed his later test of a rocket capable of reaching Washington. A February event, which came amid the first diplomatic breakthroughs between the two sides, was much smaller and featured no obvious new threats to the U.S.

The parade also provided Kim an opportunity to show off restored ties with his most important ally, China. President Xi Jinping sent his former chief of staff, Li Zhanshu, the highest-ranking Chinese official to visit Pyongyang in nine years, who was seen waving hands next to Kim.

Although China provided crucial backing to United Nations sanctions last year, Trump has since accused Xi of relaxing pressure in retaliation over their trade disputes. Kim not only needs security backing from Beijing but help rebuilding his economy, which South Korea’s central bank said slipped into recession in 2017.

“It’s favorable to both of them, but especially to North Korea,” said Choo Jaewoo, a professor of Chinese foreign policy at Kyung Hee University. “North Korea has the economic problems and there are people unhappy with that.” 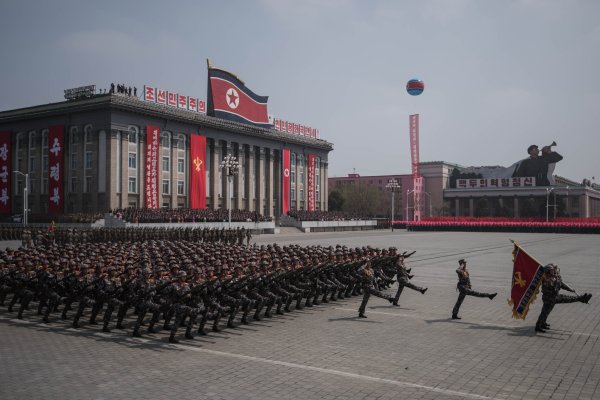