Despite the backlash in the wake of Nike’s endorsement deal with Colin Kaepernick, the sportswear company has seen a 31% increase in online sales, according to one outside estimate.

Nike sales grew 31% from Sunday through Tuesday over the Labor Day holiday this year compared with the previous year, according to Edison Trends.

On Sept. 3, Nike debuted their new campaign featuring the former San Francisco 49ers quarterback, who sparked the wave of NFL national anthem protests against racial inequality last year. His actions enraged many, leading Kaepernick, who is currently an unsigned free agent, to claim he has been blacklisted by NFL leadership. Nike followed up on Wednesday, releasing an ad featuring Kaepernick, which aired during the NFL season opener on Thursday.

After the announcement, many Nike customers blasted the decision on social media. Some filmed themselves destroying Nike products and claiming they will boycott the company.

President Trump, who has been a very vocal critic of players kneeling during the anthem, weighed in on Nike’s endorsement deal Friday, questioning the company’s decision.

The original version of this story misstated the origin of the Nike sales data. It came from an outside research firm, not from Nike. 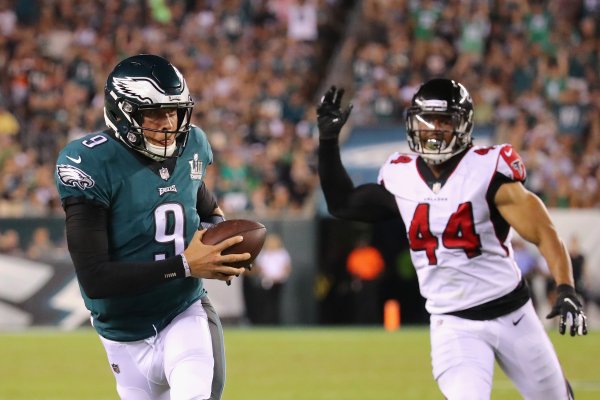 The Philadelphia Eagles Trolled the Patriots and Tom Brady Very Hard With This Trick Play
Next Up: Editor's Pick