The Costs of Human Spaceflight Are High. History Shows the Benefits Are Too

This view of the rising Earth greeted the Apollo 8 astronauts as they came from behind the Moon after the lunar orbit insertion burn.
Science & Society Picture Library / Getty Images
By John Logsdon

Almost from the time the National Aeronautics and Space Administration (NASA) opened its doors for business 60 years ago on Oct. 1, 1958, it has had to be ready to provide an answer to one question: “Why send people into space, given the costs and risks associated with human spaceflight?”

In its six decades, NASA launched just over 400 different people, many for more than one mission. Of that number, only 24 journeyed beyond Earth orbit to the Moon and back; three made that trip twice. The rest stayed close to their home planet. Although privately-funded space flights, both suborbital and into orbit and beyond, are planned for coming years, to date only NASA and its counterpart government agencies in Russia and China have developed the capabilities to carry out crewed missions.

The experience of 60 years should be sufficient to demonstrate the payoffs from spending public funds to send humans into space.

Or maybe not. Certainly there is lingering debate on the benefits of human spaceflight. For example, a perceptive 2014 assessment carried out by the prestigious National Academies of Science and Engineering observed “no defensible calculation of tangible, quantifiable benefits — spinoff technologies, attraction of talent to scientific careers, scientific knowledge, and so on — is likely ever to demonstrate a positive return on the massive investment required by human spaceflight.” The authors of this study suggested that only “intangible benefits” could justify a “major new and enduring public investment in human spaceflight,” and observed that “Americans have continued to fly into space not so much because the public strongly wants it to be so but because the counterfactual — space exploration dominated by the vehicles and astronauts of other nations — seems unthinkable.”

There are counterarguments to this judgment, of course, suggesting that the presence of humans as operators and investigators adds significant value to space activities. But overall I agree that the primary justification for human spaceflight has been, and continues to be, its intangible impacts. And, though the last few decades haven’t allowed as many of them as was once the case, those impacts are no less real.

This has been long recognized at top decision-making levels. Even before NASA was created, a June 1958 statement of space policy prepared by President Eisenhower’s National Security Council declared that “to the layman, manned exploration will represent the true conquest of outer space. No unmanned experiment can substitute for manned exploration in its psychological effect on the peoples of the world.” In recommending in May 1961 to President John F. Kennedy that he set a lunar landing as a national goal, his top space officials suggested that “it is man, not merely machines, in space that captures the imagination of the world.”

Certainly the iconic “Earthrise” image captured by Apollo 8’s Bill Anders has reshaped the perception of humanity’s home planet as a fragile oasis in the blackness of space. As the poet Archibald McLeish noted at the time, the image gave us the ability “to see earth as it truly is, small and blue and beautiful in the eternal silence where it floats” and “to see ourselves as riders on the earth together.”

The context for the U.S. spaceflight program has certainly changed dramatically since the days of the Cold War competition that powered Project Apollo. No longer are astronauts instant celebrities with the “right stuff.” Most Americans probably could not name an active space flyer. Even so, having been in space remains an experience that “captures the imagination.” When a past or current astronaut meets the public wearing her or his blue flight suit, there appears a “golden glow” that makes that person an object of fascination and a degree of envy. Many of us want to go into space ourselves. Over 18,000 people applied to be one of the 12 new NASA astronaut candidates announced in June 2017.

Most in that group surely aspire to set foot on the lunar surface in the coming decade or be among the first humans to reach Mars in the 2030s, once again turning astronauts into explorers instead of just highly-trained workers carrying out various tasks as they orbit a few hundred miles above their home planet. If that happens, then the calculus of the value of humans in space would be much different than has been the case since the last Apollo astronaut left the Moon in December 1972. With colleagues at MIT, I participated a decade ago in drafting a paper on “The Future of Human Spaceflight.” I believe that the conclusion of that paper remains valid.

We concluded that the primary justification for sending humans into space was “exploration.” We defined that word as “an expansion of the realm of human experience, bringing people into new places, situations, and environments, expanding and redefining what it means to be human.” We suggested that “human presence, and its attendant risk, turns a spaceflight into a story that is compelling to large numbers of people. Exploration also has a moral dimension because it is in effect a cultural conversation on the nature and meaning of human life.”

Most of what the United States has been doing in space since the last Apollo mission in December 1972 is not, by this definition, exploration. Repetitive shuttle flights and sequential stays aboard the International Space Station certainly have value, but, as the National Academies study suggested, perhaps not enough fully to justify their costs. But since President George W. Bush in 2004 announced “a new plan to explore space and extend a human presence across our solar system,” the United States, however fitfully, has been preparing to resume human exploration of the Moon and beyond. In December 2017 President Trump signed a directive calling on NASA to “lead an innovative and sustainable program of exploration with commercial and international partners to enable human expansion across the solar system.”

Carrying out that directive will, in my view, lead to a program of space exploration that justifies its costs and risks. Next summer will mark the 50th anniversary of humanity’s first steps on another celestial body. It is well past time to take the next steps.

John M. Logsdon is Professor Emeritus at George Washington University’s Space Policy Institute. He is editor of The Penguin Book of Outer Space Exploration, available now. The quoted material in this essay comes from that book. 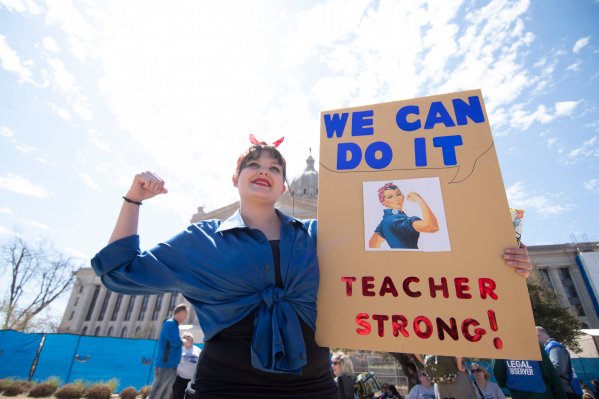 Why the First Day of School Is Time to Remember the 'Teacher Power' Movement of the 1960s
Next Up: Editor's Pick