After the New York Times published an anonymous op-ed written by a White House insider stating there’s a secret resistance working against Donald Trump from within, most news sources are calling the piece “explosive.”

But Late Show host Stephen Colbert has a different word to describe the piece: “confusing.”

“Because if you’re inside the White House pretending to be loyal to the president but secretly thwarting the president to protect the rest of us from him, why would you tell us?” Colbert asked of his audience during his opening monologue on Thursday night.

The mystery writer suggested that there are some in the administration committed to tempering Trump’s behaviors. Colbert’s response? That it’s definitely a tough job, “because all of Trump’s inclinations are tied for worst.”

“Now the hunt for the author is on,” he continued, pointing out Vice President Mike Pence as a potential frontrunner thanks to his unusual favoring of the word “lodestar,” which also appeared in the published piece. (Pence has denied writing the story.) “It has launched a frantic guessing game. As opposed to the other games: there’s collusional chairs, charade of a marriage and pin the crime on the Don, Jr,” he joked.

As for Trump’s defense — tweeting about “treason” and calling upon North Korean leader Kim Jong Un as a character witness? “You can’t have a murderous dictator vouch for you!” Well said, Colbert. 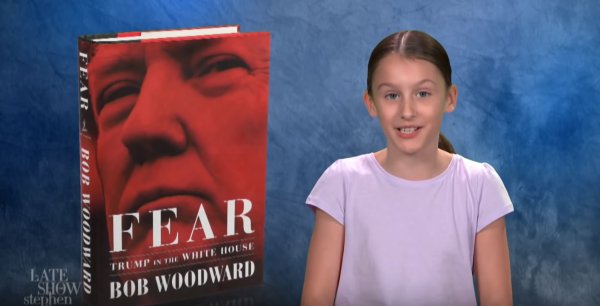 Stephen Colbert Got Kids to React to Bob Woodward's New Book About Trump
Next Up: Editor's Pick