During the third day of his Supreme Court confirmation hearings, Judge Brett Kavanaugh referred to the use of contraception as “abortion-inducing drugs.”

On Thursday, Kavanaugh was asked by Sen. Ted Cruz about his dissent in the Priests for Life v. the U.S. Department of Human and Health Services case. In 2015, while serving on the U.S. Court of Appeals for the District of Columbia Circuit, Kavanaugh sided with a religious organization that objected to providing contraception for employees with insurance.

Priests for Life contested the Affordable Care Act (ACA) requirement that all health plans cover birth control, claiming that IUDs and emergency contraception causes abortion instead of acting as birth control. Under the ACA, employers who wished for the government to fund the contraceptives had to fill out a form to their insurers to avoid a monetary fine. In the suit, Priests for Life said filling out the form made them complicit in providing contraception and violated the organization’s religious freedom.

The D.C. Circuit Court ruled in favor of the Obama administration while Kavanaugh dissented from the majority. During today’s hearing, Kavanaugh explained his dissent to Cruz.

“The question was first, was this a substantial burden on their religious exercise? And it seemed to me, quite clearly, it was,” he said. “They said filling out the form would make them complicit in the abortion-inducing drugs that they were, as a religious matter, objected to.”

The phrase “abortion-inducing drugs,” in reference to contraception, was how Priests for Life described the contraception in the suit.

Kavanaugh’s wording has many pro-choice organizations up in arms and is said to be proof of his pro-life leanings. Many opposing Kavanaugh’s confirmation have argued if he is approved, he will attempt to overturn Roe vs. Wade, the 1973 Supreme Court decision that legalized abortion nationwide.

The statement caused a stir among Democrats as well, California Sen. Dianne Feinstein tweeted that Kavanaugh has a gross misunderstanding of the case, “which was about insurance coverage for contraceptives. It’s further proof of Kavanaugh’s hostility toward women’s reproductive freedom.”

Massachusetts Sen. Elizabeth Warren also spoke out, tweeting that contraception is not abortion and “anyone who says so is peddling extremist ideology- not science- and has no business sitting on the Supreme Court.” 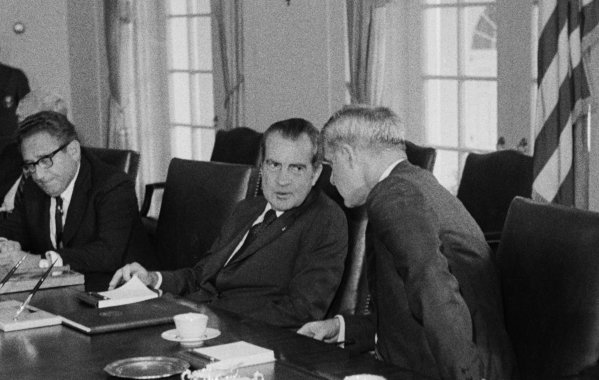 An Anonymous Trump Official Claims Insiders Are 'Thwarting' Him. That May Have Happened to Nixon Too
Next Up: Editor's Pick