These Countries Have the Most Powerful Passports in the World

Singapore can be celebrated for more than its role in the hit film Crazy Rich Asians — its passport is now the most powerful in the world.

Its ranking was determined by Passport Index, an online tool that collects data from 193 United Nations member countries and six territories to compile an ever-changing list of the world’s most powerful passports. The Index is sponsored by global financial advisory firm Arton Capital, and its annual list of the most valuable passports is decided by the amount of countries to which a passport grants entry without a visa.

Singapore’s spot on the list comes as no big surprise, as the city-state ranked high on the index’s previous list, just behind South Korea, which ranked as No. 1. in the 2017 list that was announced in February. This year, South Korea has fallen to the No. 2 spot, with a visa-free score of 165.

The United States, Finland, Germany, Denmark, along with more European nations, also rank at No. 2 with a score of 165.

South Korea and Singapore are the only Asian countries with a power rank at No. 1 and 2, though Japan joins the ranks of Italy, France and Canada at No. 3.

Last year’s list impressed many with the rise of South Korea and Singapore to the top of the list. Armand Arton, the founder and president of Arton Capital, credited the changes to the world’s evolving view of Asian nations. “This is a testament to the increased global respect and trust Asian countries are commanding,” Arton said in a statement in February.

Singapore’s rise on the global passport ranking coincides with its growing wealth. WealthInsight, a data firm which ranks wealth around the globe, reported in May that Singapore is the sixth most millionaire-dense city in the world — one in every 34 residents of Singapore are millionaires. WealthInsight also determined that the city-state has increased in millionaire density by 2.9% in the last year alone.

However, a country’s wealth isn’t necessarily proportionate to its passport power ranking. Monaco, which was ranked No. 1 on WealthInsight’s list (and has one millionaire for every three residents), only ranks at No. 11 on the Passport Index with a visa-free score of 155. 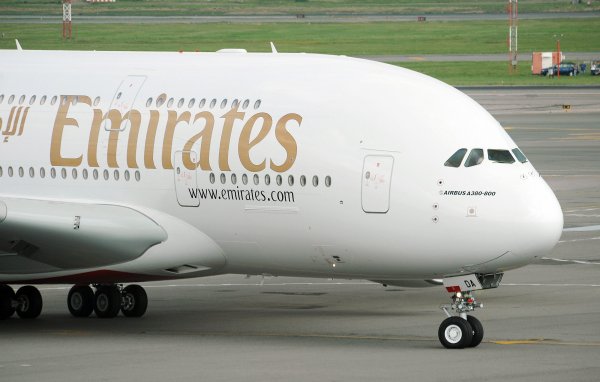 Sick Passengers and Crew Aboard Emirates Flight Test Positive for Influenza
Next Up: Editor's Pick