California Wildfire Map: Delta Fire Closes Down 50 Miles of I-5, Showing No Sign of Slowing

California’s Delta Fire has continued to spread, shutting down 50 miles of I-5 as passengers were forced to abandon their cars and flee to safety.

The wildfire, which started near Lake Shasta last Wednesday, has already burned through 25 square miles. On Wednesday the fire spread more rapidly, burning through 15,000 acres in California’s Shasta County in just one day.

As of Thursday morning, the Shasta County Sheriffs Office issued a mandatory evacuation order for residents living along Interstate 5 from exit 707 to 714. Residents of nearby Dunsmuir, Calif., have been told to be ready to evacuate as the wildfire shows no sign of slowing down due to weather conditions.

The California wildfire map below shows how far the Delta fire has spread.

Dry bush and low humidity has challenged firefighters as they attempt to tame the blaze. The cause of the fire is not yet known, but was listed as “human”- meaning it could have been accidental or purposely started. Fire officials say they expect the fire to spread further north towards Gibson, east towards Green Mountains and west towards Damnation Peak. Fire officials added that by Friday the wildfire could reach the area recently ravaged by the Hirz Fire, which is currently 75% contained.

The California Interagency Incident Management Team assumed command over the Delta wildfire as of Wednesday. They posted an update on their website on Thursday afternoon and said it continued to grow aggressively with flame reaching 300 feet high.

“Firefighters are working quickly to protect communities and structures immediately threatened by the fire. Dozers are being mobilized to construct fuel breaks and control lines north of the fire front to assist with protecting life and property. Aircraft will be used extensively for water and retardant drops in order to assist with protecting values at risk and slowing the fire’s progression.” 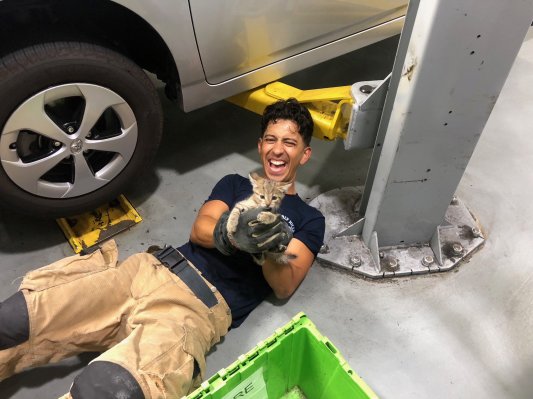 Firefighters Save Kitten That Survived 385-Mile Road Trip Trapped in a Car Engine
Next Up: Editor's Pick