Several members of President Donald Trump’s administration have denied writing an anonymous New York Times op-ed that criticizes Trump, as people speculate over who could be behind the article.

Vice President Mike Pence issued a denial Thursday, after online sleuths connected him frequently saying the word “lodestar” to its use in the op-ed to refer to John McCain. A spokesperson for the Pence’s office issued a statement denying he was behind the op-ed on Twitter.

Others quickly followed suit to distance themselves from the Times op-ed, which claims there is an effort by a group of conservative administration insiders who are working against Trump. In a tweet Wednesday evening, Trump called for the Times to reveal the anonymous writer behind the op-ed, calling the person who wrote it “GUTLESS.”

Secretary of State Mike Pompeo said he did not write the op-ed while speaking with reporters in New Delhi Thursday. “It’s not mine,” he said.

Dan Coats, Director of National Intelligence, also said he did not write the op-ed in a statement.

“Speculation that The New York Times op-ed was written by me or my Principal Deputy is patently false,” he said. “We did not. From the beginning of our tenure, we have insisted that the entire IC remain focused on our mission to provide the President and policymakers with the best intelligence possible.”

First Lady Melania Trump also weighed in to address the writer of the op-ed through her spokesperson.

“Unidentified sources have become the majority of the voices people hear about in today’s news,” Trump said in a statement. “People with no names are writing our nation’s history.”

Swift denials followed from others in the Trump administration. Commerce secretary Wilbur Ross said he “did not write and am thoroughly appalled by this op-ed.”

Secretary of Energy Rick Perry also said he was not behind the piece.

Secretary of Education Betsy Devos issued a statement denying she wrote the op-ed.

White House counsel Don McGahn, who is leaving his position after the Kavanaugh confirmation hearings, told reporters “no” when asked if he had penned the op-ed.

National Security Adviser John Bolton also said “no” in response to those asking if he had written the piece.

“As General Sherman said, ‘no,'” a spokesperson for Bolton tweeted. 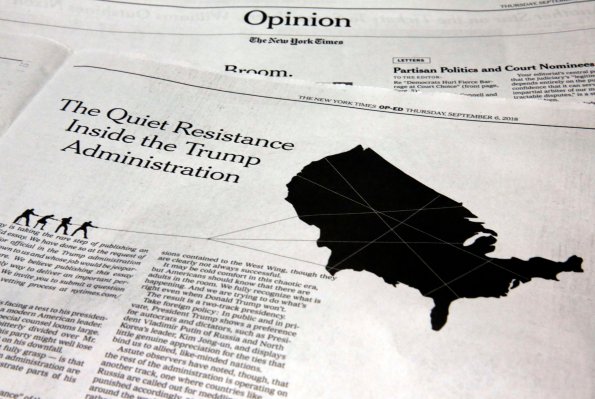